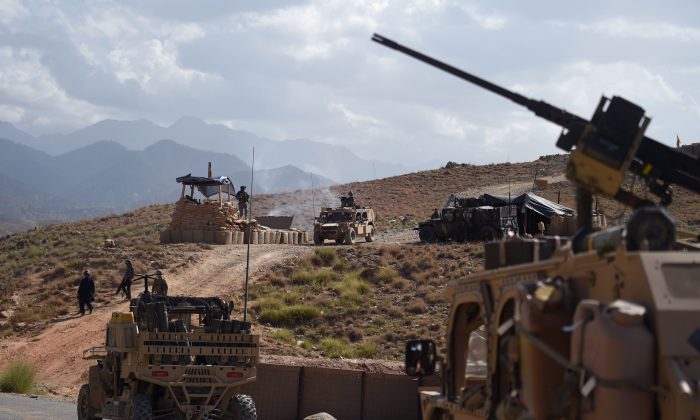 U.S. Army from NATO and Afghan commando forces are pictured at a checkpoint during a patrol against ISIS soldiers at the Deh Bala district in the eastern province of Nangarhar Province in Afghanistan on July 7, 2018, (Wakil Kohsar/AFP/Getty Images)
US News

Confidential documents reveal U.S. officials did not tell the truth about the war in Afghanistan and hid evidence that it had become unwinnable, The Washington Post reports.

The Post said it obtained more than 2,000 pages of documents through a Freedom of Information Act request made three years ago which sought to win access to the documents.

They are part of a lengthy government report to examine the “root failures” of the lengthy conflict, according to the Post, and include transcripts of confidential interviews with key figures involved in prosecuting the 18-year U.S. war.

The documents show that senior U.S. officials hid evidence and distorted statistics to make it appear that the U.S. was winning the war in Afghanistan, the publication claims.

In the interviews, more than 400 insiders gave unrestrained criticism of what went wrong in Afghanistan, which the paper said “bring into sharp relief the core failings of the war that persist to this day.”

Most of the interviewees spoke under the assumption that their remarks would not be made public and “acknowledged that their warfighting strategies were fatally flawed and that Washington wasted enormous sums of money trying to remake Afghanistan into a modern nation,” it wrote.

The Post claimed that several interviews “described explicit and sustained efforts by the U.S. government to deliberately mislead the public,” and that it was “common at military headquarters in Kabul, and at the White House, to distort statistics to make it appear the United States was winning the war when that was not the case.”

Among those interviewed was Douglas Lute, a three-star Army general who served as a war czar for Afghanistan under the George W. Bush and Barack Obama administrations.

According to the Post, in a 2015 interview, Lute said: “We were devoid of a fundamental understanding of Afghanistan—we didn’t know what we were doing… If the American people knew the magnitude of this dysfunction—2,400 lives lost.”

In one of the reported interviews, which allegedly took place in 2016, Army Col. Bob Crowley, who served as a senior counterinsurgency adviser to U.S. military commanders in 2013 and 2014, said that “every data point was altered to present the best picture possible.”

“Surveys, for instance, were totally unreliable but reinforced that everything we were doing was right and we became a self-licking ice cream cone,” the Post quoted him as saying.

In another interview Jeffrey Eggers, a retired Navy Seal and White House staffer for Bush and Obama, allegedly said: “What did we get for this $1 trillion effort? Was it worth $1 trillion?

“After the killing of Osama bin Laden, I said that Osama was probably laughing in his watery grave considering how much we have spent on Afghanistan.”

It is currently estimated that around 14,000 U.S. troops, including active-duty personnel, members of the National Guard and Reserve as well as Civilians (contractors and DOD employees remain in Afghanistan).

However, the official figure is not known as President Trump’s administration stopped publishing detailed accounts of the troops in Afghanistan through the Department of Defense records in 2018.

The Post compared the documents to the Pentagon Papers; a top-secret Department of Defense study of U.S. political and military involvement in Vietnam from 1945 to 1967, which was leaked to the press and published.

“The difference with these documents is these are all interviews, firsthand accounts from people involved in the war. They’re raw. They’re unedited. Their notes, their transcripts, some audio recordings. So you hear people’s voices come out,” the Post said.

“The Pentagon Papers was a secret study conducted by the Office of the Secretary of Defense. It was all based on internal government documents, CIA reports, diplomatic cables, but they didn’t interview anyone.

“It was more of an academic study that the Pentagon kept secret. This, on the other hand, is all interviews with people involved in the war. So it’s more human in a way,” it wrote.

The Post also said it obtained hundreds of memos by former Secretary of Defense Donald Rumsfeld.

The Epoch Times has not been able to independently review or verify the documents.