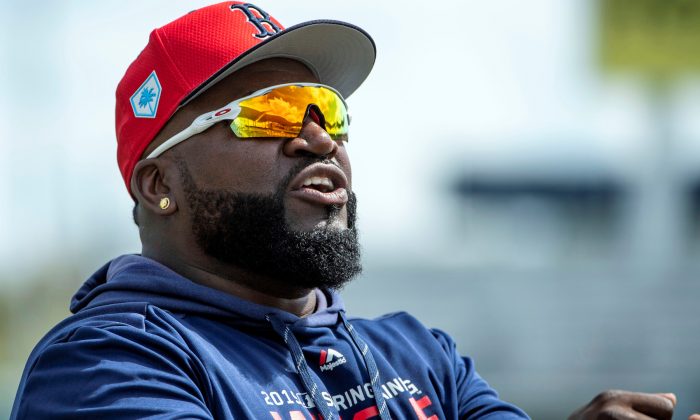 Boston Red Sox former player David Ortiz walks on the field prior to the game between the Boston Red Sox and the Minnesota Twins at JetBlue Park in Fort Myers, Florida, on on March 3, 2019. (Douglas DeFelice-USA TODAY Sports)
Americas

Confessed Ortiz Shooter: ‘It Wasn’t Supposed to Be David’

The man charged with shooting Boston Red Sox legend David Ortiz admitted that he shot him but said he was hired to kill someone else.

TMZ Sports reported on Friday, June 15 that 25-year-old Rolfi Ferreira Cruz told reporters who had crowded outside the jail in the Dominican Republic that Ortiz was not the target.

Through the bars of his cell, Cruz said he was sent to the Santo Domingo club on Sunday to kill a man who happened to be dressed like Ortiz.

“It wasn’t supposed to be David,” he said, his words translated from Spanish. He further explained he was confused by Ortiz’ clothing.

Late Thursday, police in the Dominican Republic arrested three more people in connection with the shooting, bringing the number of people in custody to nine. At least one more person is being sought.

CNN reported on the afternoon of June 15 that authorities in the Dominican Republic disputed the report, saying Cruz had admitted to them that Ortiz was the target of the attack. Instead, they speculated he had changed his story because he feared retribution from Ortiz fans inside the jail.

Ortiz was seriously injured in the attack. He underwent surgery Sunday night, June 9, in Santo Domingo and was transferred the following day to Boston and admitted to Massachusetts General Hospital, where he underwent a second surgery.

Doctors removed his gallbladder and part of his colon and intestines in the initial surgery. Ortiz also sustained liver damage.

His wife, Tiffany, offered the most recent update about the condition of “Big Papi” on Thursday, saying he was in “guarded” condition in the surgical intensive care unit.

Ortiz has been able to sit up and take some steps, and he is expected to recover from his wounds.

Ortiz began his major league career by playing six seasons for the Minnesota Twins (1997-2002), but his career blossomed after he joined the Red Sox. His postseason heroics helped Boston capture its first World Series title in 86 years in 2004, when he was the Most Valuable Player of the American League Championship Series as the Red Sox overcame a 3-0 series deficit to the New York Yankees in seven games.