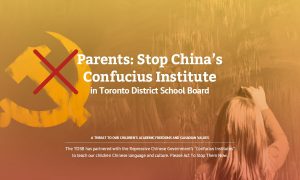 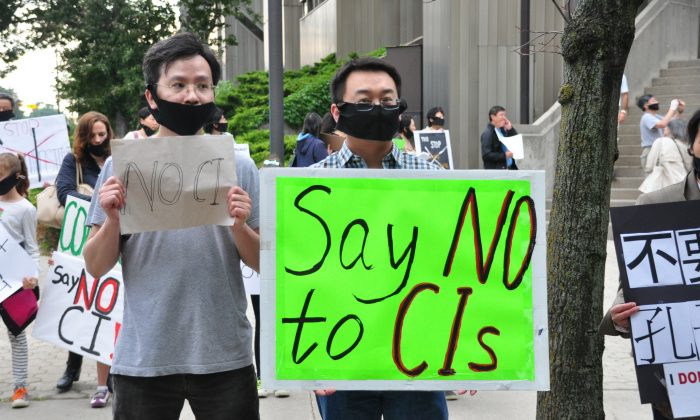 Protesters demonstrate outside the Toronto District School Board on Jan. 11, 2014, urging the board not to implement a Confucius Institute program in Toronto schools. (Allen Zhou/The Epoch Times)
Canada

Hundreds of concerned parents and human rights activists gathered outside the Toronto District School Board (TDSB) on Wednesday to urge the board, which at the same time was holding a meeting, not to initiate a Confucius Institute program in Toronto schools.

The protesters wore black tape over their mouths to symbolize the Chinese regime’s censorship, which they say finds its way into the curriculum taught in the institutes.

The controversial Confucius Institutes (CIs) are branded as promoting Chinese language and culture. However, they have been cited by intelligence agencies as organizations used by the Chinese communist regime to extend its soft power. The institutes are funded and controlled by the Chinese regime.

The agenda for the TDSB committee meeting, which was attended by a limited number of trustees, was amended to discuss the issue of bringing CIs to the TDSB.

The trustees heard from a number of concerned parents as well as representatives from Falun Dafa (also called Falun Gong), a spiritual discipline persecuted by the Chinese communist regime, and the Tibetan community, who raised concerns about the Chinese regime having some degree of control in Toronto’s education system.

Sonia Zhao, who came to Canada from China to work at the McMaster University CI, told the trustees how she and other CI instructors were required to sign a contract promising not to practice Falun Dafa. Zhao, who is a Falun Dafa practitioner, filed a human rights complaint with the Ontario Human Rights Tribunal, alleging discrimination in hiring by the institute. McMaster eventually decided to sever its ties with the CI over the institute’s hiring practices.

Another speaker pointed out that Li Changchun, the former propaganda chief of the Chinese Communist Party, has called CIs “an important part of China’s overseas propaganda setup.”

A stipulation listed on the website of the Hunan City University in China for CI candidates wanting to come to Toronto to teach says that “candidates will be assessed to ensure they meet political ideology requirements.”

Sheila Ward, trustee for Toronto Centre-Rosedale, said she was very concerned about the issues raised by the parents.

“It’s not for the parents to have to prove. It’s up to us to prove to them [that] their concerns are taken seriously and we have good answers for the questions they have given us,” Ward said.

After a lengthy session, the trustees voted to adopt a motion raised by Willowdale trustee Mari Rutka to suspend the CI until the board conducts an investigation into CIs. The decision needs to be discussed and voted on again at the next TDSB meeting on June 18 before being implemented.

“There is a lot of support and a lot of trustees saying we need more information because what the speakers brought to the table really has alerted them to some of the potential issues that they were totally unaware of,” said Michael Lewis, one of the protest organizers.

Lewis, whose daughter is a Toronto public school student, started a campaign opposing the CIs after learning about the controversy surrounding them. An online petition posted on a website Lewis launched for the campaign, SayNoToCI.ca, has gathered over 600 signatures in one week, he says.

Calls to the board and the office operating the Confucius Institute requesting an interview were not returned by press deadline. TDSB chair Chris Bolton, who has been instrumental in signing the deal with the CI, said he won’t be available for an interview until late June.