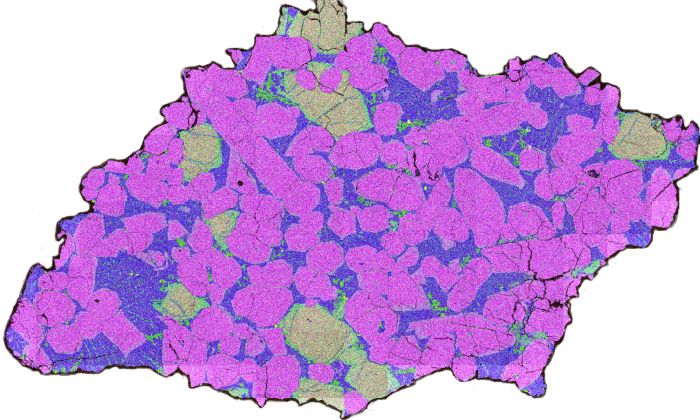 Thin section of the Martian meteorite MIL 090030 analyzed by the the University of Hawaii at Manoa NASA Astrobiology Institute researchers. (UHNAI)
Science

Boron, which could have played a key role in the formation of RNA (a precursor to DNA), was found in high concentrations in a Martian meteorite by researchers from the University of Hawaii at Manoa.

The scientists from the university’s NASA Astrobiology Institute found the meteorite in Antarctica in 2009 and discovered its Martian origin through study.

RNA “may have been the first molecule to store information and pass it on to the next generation, a mechanism crucial for evolution,” according to the university. RNA is now synthesized but is thought to have previously been made with the help of boron in its oxidized form, borate.

“Borates may have been important for the origin of life on Earth because they can stabilize ribose, a crucial component of RNA. In early life RNA is thought to have been the informational precursor to DNA,” said James Stephenson, a postdoctoral fellow at the university, in a statement. Ribose is a kind of sugar produced by the body that is crucial to cell maintenance and growth.

Stephenson and his colleague Lydia Hallis, a cosmochemist who is also a postdoctoral fellow at the university, came up with the idea of searching for borate over after-work beers.

“Given that boron has been implicated in the emergence of life, I had assumed that it was well characterized in meteorites,” said Stephenson. “Discussing this with Dr. Hallis, I found out that it was barely studied. I was shocked and excited. She then informed me that both the samples and the specialized machinery needed to analyze them were available at [the university].”

The discovery indicates that as life was developing on Earth, borate could have been concentrated in deposits on Mars. The clay studied in the meteorite is thought to be up to 700 million years old. The researchers, who published the findings in the journal PLOS One, said in the study that “Given the greater similarity of Earth and Mars early in their geological history, further exploration of Mars may prove invaluable in answering how ribose may have accumulated on the Earth prebiotically,” or before life formed on the Earth.