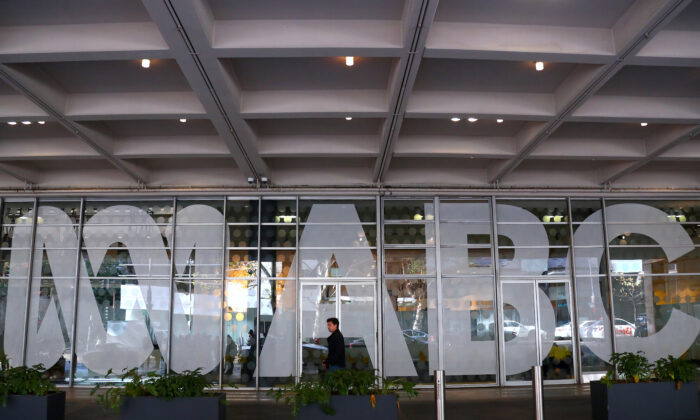 An employee walks past the logo of the ABC located at the main entrance to the ABC building located at Ultimo in Sydney, Australia, on June 5, 2019. (AAP Image/David Gray)
Australia

‘Completely out of Order’: Scholar Asked by Australian Broadcaster Not to Make ‘Anti-China’ Statements

An Australian academic revealed that he was asked “not to make anti-China comments” before an interview with the Australian national broadcaster, the ABC.

Dr Malcolm Davis, a senior analyst at the Australian Institute for Strategic Studies (ASPI), a think tank funded by the Australian government, was interviewed by ABC’s Radio National program on June 25 about the race to develop solar power in space.

Davis alleged that the request was made by a producer who assisted with the interview.

“This person then said to me, ‘Oh, look, we’ve come under a lot of pressure because we’re seen to be anti-China, so can you please not make any anti-China statements?’” Davis told The Australian.

“The actual request was completely out of order, in my opinion,” he said.

“You don’t ask someone not to have freedom of speech, which is what this person was asking me to do.”

The Ambassador’s Visit to ABC Headquarters

The request came after the Chinese Ambassador to Australia Xiao Qian visited ABC’s headquarters in Sydney on June 23.

In a press release issued on June 24, Beijing’s embassy in Australia published photos of Xiao’s visit to the national broadcaster and called for more positive reporting on China.

“This year marks the 50th ­anniversary of the establishment of diplomatic relations between China and Australia,” the ­embassy wrote in Chinese.

“It is hoped that ABC will give full play to its unique advantages in information dissemination, introduce and report China-Australia relations in a more rational and objective way, and make positive contributions to enhancing mutual understanding and friendship between the two peoples.”

Davis said that after reading the press release about Xiao’s visit to ABC, he couldn’t avoid putting the two things together.

“That’s where the pressure has come from,” he said.

“This is the first time I’ve had someone actually say, ‘Can you please not say something essentially anti-China?’”

ABC Radio National responded to the comments by Davis saying that the academic had misunderstood the producer’s request.

The national broadcaster explained that the focus of the story was on space solar technology, rather than further discussion of geopolitics.

“Before the interview, the producer explained that Greg Sheridan (The Australian’s foreign editor) had just been on that morning’s program talking about the Chinese ambassador’s speech, including making criticisms of China,” the ABC told The Australian.

“Unfortunately, it appears this was misconstrued as being a ­request to not criticize China, which was not the intention.”

The Epoch Times also reached out to ABC Radio National for comment but did not receive a response.

Sheridan was referencing Xiao’s June 24 speech on China-Australia relations at the University of Technology Sydney (UTS).

During his speech, Xiao denied that Beijing had imposed trade sanctions on Australia, saying the measures were due to dumping complaints from Chinese companies and the Chinese public’s dissatisfaction with Australia calling COVID-19 the  “China virus.”

The concerns have been misrepresented as preconditions, Xiao said, referring to a list of 14 grievances by the Chinese Communist Party (CCP) to the Morrison government in November 2020.

However, the Ambassador’s speech was interrupted continually by a series of protests calling for action on Tibet, Hong Kong, Xinjiang, Uyghurs, and human rights abuses in China.

Drew Pavlou, head of the Democratic Alliance party and an anti-CCP activist, was among the protestors who were evicted by the security guards immediately.

In response to the Ambassador’s speech at UTS, Greg Sheridan said Xiao’s claim that there’s no trade ban imposed by the Chinese government is “complete and absolute baloney.”

“However, it indicates the way the trade bans will end, just as the Beijing government didn’t announce the imposition of the trade bans,” he told ABC on June 25.

“So it won’t announce the lifting of the trade bans, partly because the Chinese Communist Party government can never admit that it got anything wrong, or even that it’s making a course correction of itself.”

In the ABC program, Dr Malcolm Davis pointed out that China has recognized the potential value and currently investing in renewable energy, like wind, wave, and solar power.

“There are currently several international projects to develop a solar power station in space that aims to tap the energy of the sun’s rays without interference from the atmosphere, or any seasonal or night-time loss of sunlight,” he said.

“It seems that China might be leading the pack as well.”

However, there are concerns that forced labour in China’s solar manufacturing industry has driven down the cost.

At least six in every 10 of Australia’s largest solar farms have sourced solar panels from supply chains vulnerable to China’s Uyghur forced labour programmes, an investigation by The Epoch Times found out.

Nationals Senator Matt Canavan said he was worried that many groups had been pushing for solar power without considering the ethical implications of China’s forced labour campaign.

“There are multiple and credible reports that China has used slave labour to artificially suppress the cost of solar panel production,” Canavan told The Epoch Times.

“It is outrageous that many claim that solar power is cheap without disclosing the potential that this could be due to the oppression of the proud Uyghur peoples.”