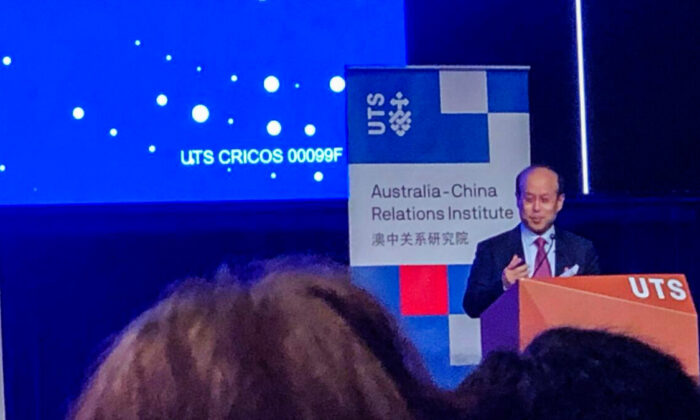 China’s ambassador to Australia Xiao Qian on June 24 visited the headquarters of the Australian Broadcasting Corporation (ABC) in Sydney as he encouraged the taxpayer-funded media organisation to adopt a more Beijing-friendly narrative.

Xiao was greeted by the ABC’s top figures, including ABC News Deputy Director Gavin Fang and the ABC’s Managing Editor for National and International News Lisa Whitby, according to the Chinese embassy’s website.

Xiao reportedly said he hoped the ABC “will give full play to its unique advantages” as a mainstream media agency with a strong influence to report on the China-Australia relations “more rationally and objectively.”

The Chinese ambassador also praised the ABC as a “witness and recorder” of the exchanges between China and Australia, and urged the national broadcaster to “make positive contributions to strengthen mutual understanding.”

According to the Chinese embassy, Fang and others told the Ambassador they are willing to enhance the dialogue and noted that Australia-China relations have always been one of the priorities of ABC’s news coverage.

The Epoch Times has reached out to the ABC for comment but didn’t receive a response in time for publication.

The ABC was one of the first media agencies in the Western world to set up a bureau in China.

Beijing denied that its censorship of the ABC website was politically motivated, but did not explain how the ABC had violated its internet regulations.

Xiao’s visit to the ABC comes one day before he delivered a speech at the University of Technology Sydney, calling for a “reset” in economic cooperation between Australia and China.

Protestors interrupted the speech six times by standing up and questioning Beijing’s treatment of the people in Tibet, Hong Kong and Xinjiang.

“You’re a disgrace,” one protester shouted, accusing the CCP of genocide against the Uyghur community in Xinjiang. “What about freedom of expression.”

One of the protest organisers, Drew Pavlou, head of the Democratic Alliance party, said on Friday that Xiao should not be given a platform to promote Beijing’s narrative.

“We wouldn’t have been allowed to speak to the Chinese ambassador,” he told The Epoch Times.

When questioned about two Australian citizens currently detained in China, Yang Hengjun and Cheng Lei, the Chinese ambassador said he did not think that they should be released.

“Here’s a good example. Tasmania is part of Australia, and no one should ever challenge that,” he said.

The Chinese ambassador’s push for a more Beijing-friendly media narrative was set against a backdrop of increasing condemnation of the CCP among the Australian public as a result of China’s economic retaliation against Australia and its handling of COVID-19.

According to a Lowy Institute poll in 2021, only one percent of Australians believe Australia should back the regime in Beijing, nearly two-thirds considered China under the Chinese regime as a security threat—a 22 percentage point increase from 2020, and only 34 percent view China as an economic partner compared to 55 percent in 2020.

Meanwhile, China experts have been calling out Beijing’s tactics of conflating the communist party with the Chinese people.

Professor Miles Yu, a former adviser to Pompeo on strategies related to China, said on Sept. 1 that “anyone who has life experience in China would immediately conclude that the interests of the Party and the people are not the same.”

“For example, people want freedom but are denied on the pretext of national security.”

“While the CCP has silenced the people and tied their hands, they claimed to represent the people they keep hostage—these are exactly the characteristics of a rogue regime.”

Angela Bright contributed to this report.

A previous version of this article gave an incorrect job title for ABC Managing Editor Lisa Whitby. The Epoch Times regrets the error.