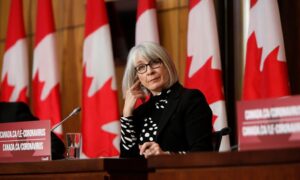 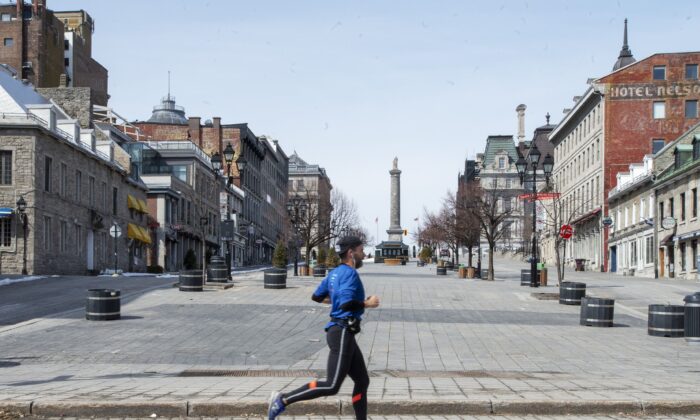 A man jogs through an empty Place Jacques Cartier in Montreal on March 25, 2020, as the COVID-19 pandemic began to take hold in Canada. (The Canadian Press/Ryan Remiorz)
Canada

Canada’s public health response to COVID-19 pandemic was slow getting off the ground, largely due to complacency and a focus on optics over substance on the part of federal bureaucrats, a health economist says.

Livio Di Matteo, a professor of economics at Lakehead University, says Canada’s system developed to provide early warning of infectious disease outbreaks had been quietly deactivated prior to the pandemic. On top of that, stockpiles of protective equipment were allowed to decline, which led the country to be “not terribly well-prepared” when the pandemic struck.

“Canada was hit by SARS circa 2004, along with a number of other countries. And in the wake of SARS, Canada was very concerned. They had numerous reports and studies and they began to take measures to deal with future pandemics, including stockpiling health supplies, etc.,” Di Matteo said in an interview.

“But something seems to have happened between roughly 2007–2008 and the present, and part of it may have been the absence of a major public health crisis since SARS. … In the end, I think it was complacency, because governments are strange creatures.”

He says some other countries were in a similar situation, becoming “very complacent” due to having successfully weathered the 2009 H1N1 pandemic as well as keep Ebola at bay.

“I think to a certain extent, politicians began to believe that in some ways we were immune from future pandemics, and that turned out to not be the case,” he said.

“So a lot of what happened is a sort of complacency, a sort of benign neglect. But I think part of it is sort of the tendency of bureaucracy to focus a lot more on brand and image and communications, as opposed to the actual substance of public health.”

News emerged in the spring of 2020 that Canada’s pandemic alert system, the Global Public Health Intelligence Network (GPHIN), had been disabled in May 2019, removing the ability of Public Health Agency of Canada (PHAC) analysts to trigger alerts.

An independent review of the GPHIN was commissioned by the government last year after some PHAC scientists said their early warnings of COVID-19 were ignored.

Released on July 12, the subsequent report by a three-member panel found that, among other things, the authority of analysts to issue alerts was removed in 2019. Any alerts had to be approved by PHAC’s vice-president before they could be issued. The change “caused significant distress for the team, particularly because management at the time provided no further direction on how this core function should be carried out,” the panel wrote.

The panel’s findings correspond with a report issued by Auditor General Karen Hogan in March, which stated that “after this change, the number of alerts decreased significantly.” In 2019 and 2020, only two alerts were issued—a significant drop from an average of one to two per month from 2015 to 2018.

The panel noted that GPHIN began issuing daily reports about the COVID-19 virus in late December 2019. The daily report on Dec. 31, 2019, contained links to articles describing an outbreak of viral pneumonia of unknown origin in Wuhan, China. Unlike alerts, however, daily reports were sent only within Canada to federal, provincial, and territorial partners, and not to international GPHIN subscribers.

The panel also highlighted the issue of a key position—chief health surveillance officer—that had been left vacant since 2017, noting that the absence of this role was one of the reasons why the surveillance activities were not well co-ordinated in the years leading to the COVID-19 pandemic.

The panel recommended a stand-alone risk assessment office that can take both surveillance from the GPHIN and information from Canada’s security and intelligence communities and quickly decide the level of risk and what can and should be done about it. It also suggested that the GPHIN might benefit from private partnerships to improve its technology.

Prime Minister Justin Trudeau said the government will consider the recommendations proposed in the report.

“We’re going to look very carefully at how we can move forward, not just in regards to that particular department or agency, but indeed, across the government to make sure we are better prepared for any future pandemics,” Trudeau said on July 13.

Di Matteo says dealing with a pandemic “requires a consistent and sustained effort,” noting that countries such as Singapore and Taiwan that also experienced SARS remained vigilant in the intervening years.

“I think we could have done better, particularly because we were one of the countries that originally was affected by SARS. And if you look at some of the other countries that were affected by SARS, they were much more vigilant after SARS, and their mortality rates, their COVID-19 incidence rates, are substantially lower,” he said.

“Going forward in the future, the most important lesson of the pandemic is to learn from the pandemic. And so it’s important for governments at the federal and provincial level to learn the lessons and make sure that they’re not caught with their pants down again.”