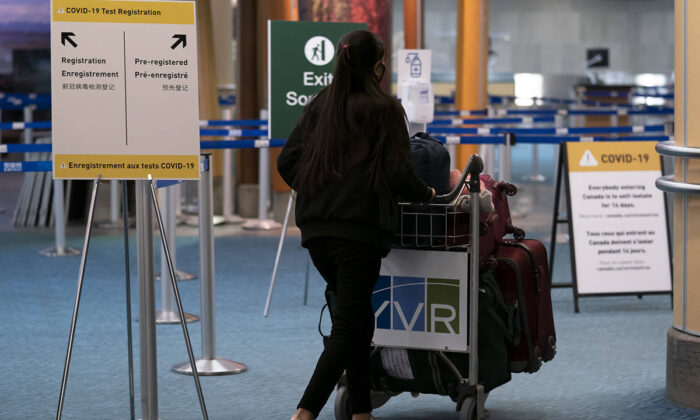 The documents obtained recently by The Epoch Times relate to four lawsuits challenging the mandate that have shed some light on the thinking that led to a policy that aimed to have a “strong” and “world-leading” mandate.

Jennifer Little, director general of the COVID Recovery Team at Transport Canada, was responsible for drafting the mandate policy, which included developing recommendations for decision-makers with regard to mandate exemptions.

Little, who submitted an affidavit in April, was cross-examined in early June as a government witness in defence of the travel mandate. She was asked during cross-examination whether it was her idea to not have compassionate exemptions.

“In the course of developing a policy … we looked at a number of circumstances. This was intended to confirm … policy direction from decision-makers,” she said.

Little mentioned she was the lead author of an Oct. 2 brief to Transport Minister Omar Alghabra titled “Implementing a Vaccine Mandate for the Transportation Sector.”

It described the policy as “one of the strongest vaccination mandates for travellers in the world.”

The Transport Canada manager said the brief contained all the considerations for different exemptions.

“And did you specifically recommend that there be no exemption for travellers on compassionate grounds?” pressed lawyer Sam Presvelos.

“So it was one of our considerations. It was something for decision-makers to decide whether or not to include that as one of the very few exemptions,” Little said.

“We did have direction to allow for very few exemptions in the policymaking that … we were working on … over the course of the fall.”

Little said the fewer exemptions were granted to the unvaccinated, the more safe and secure the transportation system would be.

Many people have reached out to The Epoch Times to share stories of how, because of the mandate, families were broken or they missed key moments like weddings and funerals.

The carriers were responsible for issuing exemptions. To avoid making them liable under human rights legislation, exceptions for medical or religious reasons were allowed, Little said.

There is also a National Interest Exemption Program to allow the unvaccinated to travel for reasons that are “in the national interest and critical to Canada’s success as a country,” says Little’s affidavit, with the example provided being of someone needing to travel to participate in a COVID-19 vaccine clinical trial.

This program was also used to bring in unvaccinated Ukrainians fleeing the war.

The travel vaccination mandate for planes, trains, and some marine vessels came into force on Oct. 30. It was suspended on June 20, but the Liberals said it could be brought back in case of a virus surge.

While ministers have repeatedly said they were following the science and public health advice for imposing and keeping the mandate in place, court documents so far show that the Public Health Agency of Canada did not recommend it.

The Epoch Times contacted Health Canada to find out if any individual, agency, or group within the department ever recommended that the government impose, keep in place, or remove the vaccine mandates.

An unidentified spokesperson did not directly answer and instead pointed out those policies were put in place by Transport Canada and the Treasury Board.