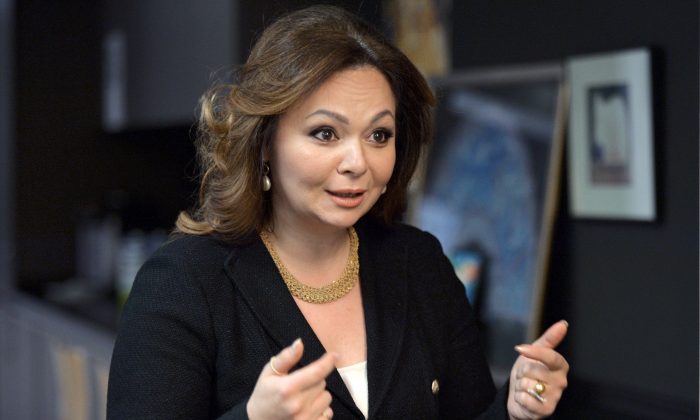 Before and after Russian lawyer Natalia Veselnitskaya met with Donald Trump Jr. at Trump Tower on June 9, 2016, she had also met with a co-founder of Fusion GPS—the opposition research firm hired by the Democratic National Committee (DNC) and the Clinton campaign to manufacture the Trump-Russia conspiracy.

It notes that the meeting occurred at a time when Fusion GPS was paid by a law firm working on behalf of a Russian oligarch, while it was also paying a former British spy, Christopher Steele, to gather unsubstantiated claims for the dossier from Russian government contacts still active in the Kremlin whom he only spoke with through intermediaries.

The latest finding adds to a growing list of scandals around Fusion GPS and the unproven Trump-Russia conspiracy, which the company was paid by the DNC and Clinton campaign to create in the form of the now discredited dossier.

Fusion GPS produced the dossier during the 2016 elections that accused the Trump team of having ties to Russia, and then spread the dossier among news outlets and U.S. government officials.

Fusion GPS attempted to block a House Committee request for bank records to reveal who paid for the dossier, after House Intelligence Committee Chairman Devin Nunes (R-Calif.) issued a subpoena for the records on Oct. 4.

Fusion GPS was later cleared to reveal who paid for the dossier, after a lawyer at Perkins Coie—where Hillary Clinton’s lawyer, Marc Elias, is a partner—allegedly sent it a letter. The Washington Post then published a story on Oct. 24 revealing that the DNC and Clinton campaign were behind it.

After this revelation, President Donald Trump said on Oct. 25 that “the hoax has turned around,” and added “I think it’s very sad what they’ve done with this fake dossier. It’s a very sad commentary on politics in this country.”

Then, also on Oct. 25, the Campaign Legal Center, a nonpartisan nonprofit on election laws, filed an FEC complaint stating that the Clinton campaign and DNC may have violated campaign finance laws by financing the dossier.

“They failed to accurately disclose the purpose and recipient of payments for the dossier … effectively hiding these payments from public scrutiny, contrary to the requirements of federal law,” it stated in a press release.

The new revelation that Russian lawyer Veselnitskaya met with a Fusion GPS co-founder before and after her meeting with Trump Jr. adds yet another piece to the growing puzzle.

A cornerstone of the Trump-Russia conspiracy is that Donald Trump Jr. met with Veselnitskaya at Trump Tower on the premise she could provide opposition research on Hillary Clinton—an offer she did not follow through on.

Months before her meeting with Trump Jr. Veselnitskaya was given special permission to enter the United States without a visa by the Obama Justice Department under Loretta Lynch. Veselnitskaya has ties to Fusion GPS co-founder Glenn Simpson, and she was working on a Russian lobbying effort alongside Fusion GPS.

The mounting evidence is raising questions of whether Fusion GPS was involved in manufacturing its own evidence, and whether the Obama administration used claims from Fusion GPS to obtain FISA warrants to monitor the Trump team during the elections.

Congress is now investigating whether the Obama administration used the dossier to obtain FISA warrants to spy on the Trump team amid unproven rumors it was colluding with Russia, and whether Fusion GPS paid journalists to spread its claims.

After a House panel requested records that could reveal whether Fusion GPS was paying news outlets and reports to publish its discredited claims, Fusion GPS also recently sought a new restraining order to block the records from being released.