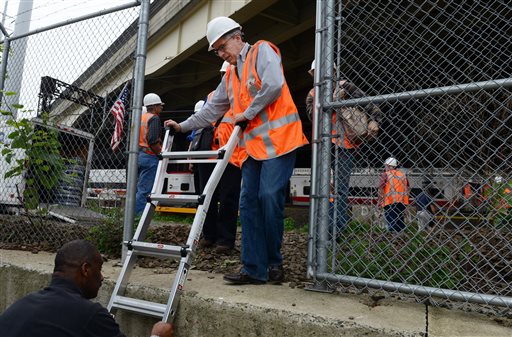 Metro-North Railroad President Howard Permut gets ready to descend a ladder after touring the scene of the train derailment, in Bridgeport, Conn., on Saturday, May 18, 2013. (AP Photo/The Connecticut Post, Christian Abraham)
New York

Commuters who depend on the Metro-North Railroad will have to cope with reduced services and delays Monday and throughout the week following a train collision near Bridgeport, Conn., on Friday.

More than 100 buses will be available, but will not accommodate the thousands of diverted passengers, warn authorities. Interstate Highway 95 is expected to be overloaded.

“To everyone that uses the highway system, consider carpooling,” Connecticut Gov. Dannel P. Malloy told the Hartford Courant. “We really need you to do this. I am not simply talking to people who use the train system normally.”

Malloy says roads could be a mess for a week as Metro-North Railroad crews repair tracks, overhead wires, and other equipment. Repair work will involve rebuilding 2,000 feet of track. Metro-North President Howard Permut calls the work the wholesale reconstruction of a two-track electrified railroad.

There will also be reduced service between South Norwalk and Grand Central Terminal. A shuttle train will operate between New Haven and Bridgeport with shuttle buses running between Bridgeport and Stamford.

“The shuttle services will be operating, but it will be very difficult for customers,” James Redeker, Connecticut Department of Transportation commissioner, told the Courant. “There will be lines, it will take longer and it’s going to be a difficult commute if that’s your option.”

Each day, approximately 30,000 Metro-North customers use the stations where service has been shut down, according to the Metropolitan Transportation Authority, which operates Metro-North.

There is no word yet on whether towns will suspend parking rules for thousands of commuters driving to different stations.

The cause of Friday’s derailment is not yet known, reported the National Transportation Safety Board (NTSB) Sunday.

The trains were traveling at about 70 mph just before the collision, which is normal speed. The derailed trains are back on the tracks and the two cars that suffered the most damage have been removed and are being inspected. A mark was found on one of the wheels, which NTSB says could be relevant, though it is unclear yet exactly how.

The Courant reports that seven of the 70 injured passengers are still in hospital.