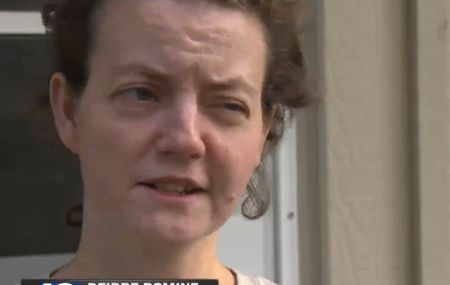 Deidre Romine, who was charged with theft for taking money out of a fountain in Bellefontaine, Ohio. (Screenshot/10TV)
US

Deidre Romine suffers from mental health issues and was close to losing her home.

She scrounged up the change from a fountain in Bellefontaine, Ohio, and was charged for theft Wednesday.

“The money didn’t belong to anybody so I just took it out of there,” Romine told 10 TV. “I’m trying to feed myself.”

10 TV interviewed her from her home, where she has four cats she considers family. She is also trying to feed the cats, she said.

When she was confronted by an officer, she was scared: “Soon as the cop asked me what I was doing, and I was afraid to tell him.”

Will Zell started a crowdfunding campaign on GoFundMe.com to raise money for Romine. As of Thursday morning, the campaign had raised $1,325, surpassing the $200 goal.

“She was just hungry,” Zell writes.

Kelitha Hogue wrote on the GoFundMe page: “It is people like you that make me proud to say I am from Bellefontaine!”