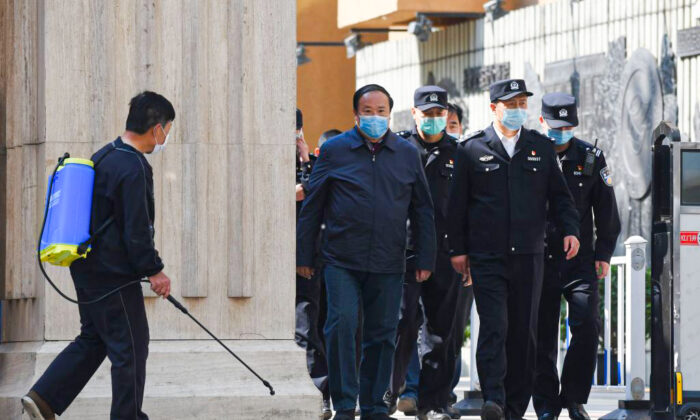 Police and officials emerge from a high school in Beijing on April 27, 2020. (Greg Baker/AFP via Getty Images)
Chinese Regime

China’s ruling Communist Party (CCP) has issued a notice ordering police to be sent into all Chinese schools as vice principals for “security reasons.” Experts have criticized the move as an excuse for the regime to further tighten its control over Chinese society, which is arguably already a police state.

Major Chinese news portal NetEase reported on the notice, issued by China’s Ministry of Education on June 6, which stated that the Party would require all schools to appoint a police officer to be vice principal to “promote the rule of law in education and tackle bullying and violence in schools.” The notice was also circulated on social media, causing an uproar and widespread criticism.

A netizen wrote in a post, “[For security reasons] you can set up an alarm point or a patrol post on campus, why do you need to send in a police as vice principal?”

Another post reads, “China has fully become a police state!”

The notice comes following a Ministry of Education order that was issued last December, dubbed Measures for the Appointment and Management of Vice Principals of Law in Elementary and Middle Schools. It was due to be implemented on May 1.

Regarding the regime’s new measure, Feng Chongyi, a professor at the University of Technology, Sydney, told The Epoch Times that the rule was clearly for the regime to be able to maintain political stability under its one-party rule and to further control the people.

“‘Security’ in the eyes of the Chinese Communist Party does not mean you, the people’s safety, or your personal security, but the security of the regime. It uses its police force to deal with the opposition and the resistance of the people with violence,” he said.

Feng noted that before the CCP came to power in 1949, it had actively pushed for police to be removed from campuses.

“Over the years, I and those who study history feel very sad. In the 1940s, during the constitutional movement in China in the Republican Era, the police and political parties’ branches were removed from schools and universities,” he said. “Educational independence and academic freedom were regarded as a marker of civilization. At that time, the CCP was the most active to push for their removal for its own political agenda.

“Now, it’s terrifying to see the CCP bring back the methods from the Mao era: to politicize everything and to build a comprehensive police state.”

A doctor of law surnamed Zhang in Beijing agreed with Feng’s analysis, telling The Epoch Times that with the police in charge of schools, the CCP can have total control over the people.

“They have ulterior motive, which is to create an excuse for the CCP to implement all-round police control through violence over all strata and fields of society,” he said. “They deliberately lead China to the abyss of a police state, using violence to control violence.”

A lawyer surnamed Li in mainland China told The Epoch Times on June 9: “Before the implementation of the new measure, in fact, the police were already in contact with every school in their jurisdiction, it’s just that they did not yet hold the position of vice principal. In fact, the new policy is not a big change from before.

“The issue of violence on campus is being exaggerated. If it exists, it is an educational problem.

Zhao Fenghua and Luo Ya contributed to the report.