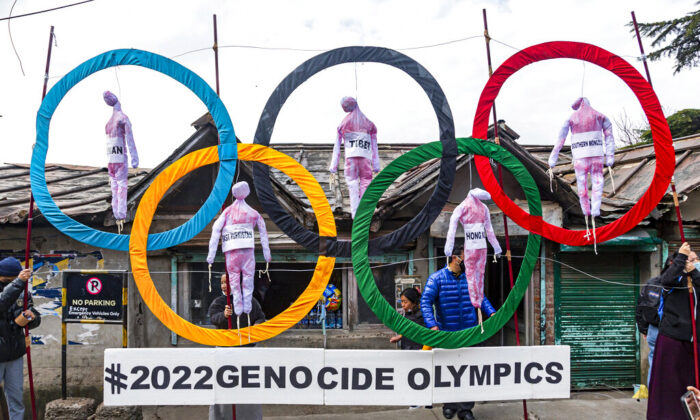 Exiled Tibetans use the Olympic Rings as a prop as they hold a street protest against the holding of 2022 Winter Olympics in Beijing, in Dharmsala, India, on Feb. 3, 2021. (Ashwini Bhatia/AP Photo)
Thinking About China

Communist China and Human Rights Are Like Oil and Water

The XXIV Olympic Winter Games are a really, really important milestone for Xi Jinping and the Chinese Communist Party (CCP). The games are being carefully choreographed in order to showcase China’s supposed ascendancy to world leadership.

Xi himself has declared that “China is ready” for the Olympics, so it must be true! At least that’s what the CCP’s narrative is. Everyone else may have at least some doubts about that, especially given the diplomatic boycott of the Games by at least six countries, including the United States, in protest of the Uyghur genocide and forced labor camps in Xinjiang.

White House press secretary Jen Psaki even used the “G” word (genocide) when she announced on Dec. 6 that no official U.S. diplomatic mission would be sent to China for the Olympics next month.

This is the generally-accepted definition of genocide from the Merriam-Webster dictionary: “The deliberate and systematic destruction of a racial, political, or cultural group.”

However, it would appear that the definition has been cheapened because a diplomatic boycott means nothing in the grand scheme of things other than a weak protest and a bit of a war of words with the Chinese communists (Chicoms). Beijing vociferously protested the “politicization of sports” and claimed that U.S. diplomats had not been invited in the first place in an attempt to discredit the boycott, and has subsequently attacked the United States for past human rights abuses.

The show will go on, despite the refusal of China to grant international inspections in Xinjiang to ascertain the truth about the detention camps.

And the U.S.-China dialog will go on, too, as the Biden administration continues to kowtow to Beijing, preferring engagement and “competition” to confrontation and consequences—despite increased Chinese aggression and belligerence over the past year.

Engagement with the Chicoms—as practiced both before and after the brief return to a policy of U.S. national self-interest in dealing with China during the Trump presidency—has not curbed Beijing’s undemocratic behavior or aggressive behavior, both domestically and internationally.

To the contrary, the CCP has been emboldened and enriched over the years by the Western nations’ weaknesses. Did the CCP moderate their behavior after the 2008 Summer Olympics in Beijing during the “engagement period” of Washington’s China policy? Not so much, as would certainly be verified by the 1 million Uyghurs who are detained in one of the 380 internment camps operating in Xinjiang Uyghur Autonomous Region.

A diplomatic boycott of the Winter Games means nothing in the grand scheme of things other than a continued CCP agitprop campaign and weak protests from the Biden administration.

One would think that hard-nosed U.S. confrontation of Beijing with the facts of the CCP’s ongoing genocide against the Uyghurs would be in order instead of a toothless diplomatic boycott. After all, the Newlines Institute for Strategy and Policy together with the Raoul Wallenberg Center for Human Rights released a report last March detailing China’s violation of the 1948 Genocide Convention in its treatment of its minority Uyghur population.

The report documents five acts of genocide committed against the Uyghurs—for each and every one of the five specific genocide provisions in Article II of the Genocide Convention:

Is “meaningless” too harsh a word to use in characterizing the Biden administration’s response to the Uyghur genocide?

Consider that on Dec. 9—a mere three days after the Biden White House announcement of the U.S. diplomatic boycott of the Winter Olympics because of “Chinese genocide against the Uyghurs”—U.S. Secretary of State Antony Blinken, in marking the “International Day of Commemoration and Dignity of Victims of the Crime of Genocide and the Prevention of this Crime,” issued an official generic pablum statement: “Let us recommit to use all the tools at our disposal in a collective effort to prevent and respond to genocide and other atrocities.”

Nothing specific at all—no mention of the Uyghur genocide or actually “employing those tools” against China.

And to top it off, there’s still no official State Department press release announcing the boycott of the Olympic Games. That is how much the diplomatic boycott of the games really means: nothing! Blinken “forgot” about the Uyghurs in three short days, and the Biden administration went back to the business of U.S.-China “competition-not-confrontation” policy.

Fortunately, the U.S. Congress lit a fire under the Biden administration by passing the Uyghur Forced Labor Prevention Act just before Christmas, which prohibits U.S. importation of any goods made in Xinjiang unless the importer can prove the goods were not produced in using forced labor.

According to the New York Post, President Joe Biden on Dec. 23 signed the bill “off-camera and without media in the room” so as not to publicly embarrass China.

But it is the Global Imams Council (GIC) of Muslim faith leaders who are doing it right! As reported by The Epoch Times, the Council “banned followers of Islam from participating in and attending the 2022 Winter Olympics in Beijing, citing the oppression of Uyghurs.” Maybe other organizations and nations will now follow suit.

The CCP has been practicing political and psychological warfare on the world stage since the People’s Liberation Army consolidated the modern Chinese state at the barrel of a gun in 1949. China has a well-coordinated agitprop campaign that’s run by the CCP and supported by the Chinese diplomatic corps, state-run Chinese media, pro-Beijing foreign diplomats, media figures, and others that can be focused on any political target of interest with alacrity. The kerfuffle about the diplomatic boycotts is a case in point.

While the United States and a few other nations were weakly issuing diplomatic boycotts of the Winter Games to protest the Uyghur genocide, the CCP’s propaganda organs were simultaneously trumpeting Xi’s letter of congratulations to the “2021 South-South Human Rights Forum” held in Beijing last month.

How’s that for chutzpah given the findings of the Newlines Institute reported cited above? Was Xi serious or was he just flipping us all off?

In claiming that “China’s human rights cause has made remarkable achievements,” Xi and his China Daily stenographers are in reality blatantly ignoring and trampling on the basic human right to life and liberty of Uyghurs and other long-oppressed minority populations in China. One wonders how the Uyghurs and Tibetans, for example, would view Xi’s claim about the CCP’s “respect for human rights.”

The only conclusion possible is that “human rights with Chinese characteristics” is actually nothing more than CCP-orchestrated genocide. If only the CCP apparatchiks at China Daily could do some field work in Xinjiang and obtain a personalized dose of their definition of “human rights protection.”