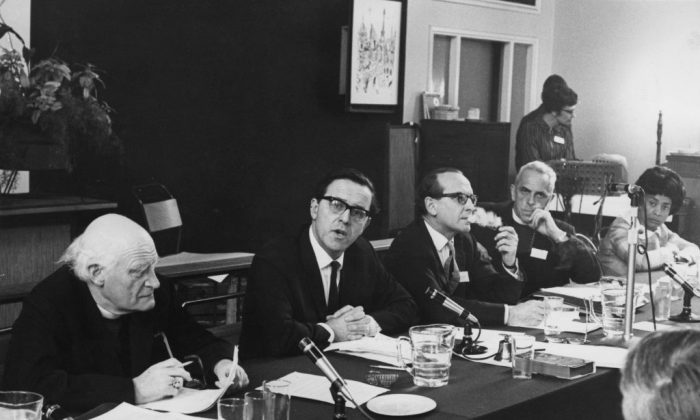 History can explain a lot about international politics. The United States was founded by colonists striving for independence. Wanting freedom from England and prepared to go it on their own, they reluctantly agreed to unite for purposes of defense and trade.

The system they created established the federal government as one of limited authority. Most powers remained with the people and the local (or state) governments.

These early Americans created an economic system based on free trade and fair agreement between competent adults. Innovation, hard work, and the development of new ideas were encouraged and rewarded. Inventors, artists, authors, and merchants who provided a desired service or product usually found people who were happy to compensate them, sometimes richly.

Communism, on the other hand, was founded on class struggle. Proletarian wage-earners saw their opposition not in geographic divisions but in class distinctions. The bourgeoisie, it was said, was oppressing the working class by keeping wages as low as possible. Workers of the world were called upon to unite in a common struggle against the capitalists, wherever they were found.

While capitalism rewards individuals who come up with new ideas, the communist/collective model holds that the central authority already has the best ideas and they just need to be implemented. In fact, communism needs all members of society (or at least the overwhelming majority of them) to go along with central planning. It doesn’t work well if there are holdouts.

That helps explain communism’s inevitable tendency toward totalitarianism. The natural capitalist inclination, on the other hand, is away from command and control, toward liberty.

A capitalist is only minimally affected by communist practices that take place in nations other than his or her own. Communism elsewhere may limit trade opportunities, but it doesn’t fundamentally affect the economic system of the capitalist nation. A communist society, in contrast, is affected significantly by free markets that exist outside of its system. Those markets reflect the true value of goods and services, add to the potential of black markets inside communist-ruled countries, and tempt people to look outside of and beyond the controlled communist system.

Thus, communists have a natural desire to spread their doctrine beyond their borders and to shut down free markets.

The Bolshevik Party embraced internationalism as soon as it seized power in the Russian Revolution. The Soviet Union was presented as a “homeland of communism” from which revolution would be spread around the globe. Accordingly, Soviet authorities fostered international ties with communist and left-wing parties and governments, but they did more than that. They established new or infiltrated existing international organizations for the purpose of spreading their philosophy.

One of the most important such groups, the World Council of Churches (WCC), was infiltrated and controlled by Russian intelligence as early as 1961. The Mitrokhin Archive, a voluminous collection of foreign intelligence documents smuggled out of the Soviet Union in 1992, provides the identities and Soviet intelligence code names of many Russian Orthodox priests dispatched to the WCC for the purpose of influencing politics and policies. In 1972, Soviet intelligence even managed to have their agent, Metropolitan Nikodim (code name “Adamant”), elected as WCC president.

In 1985, the WCC elected its first general secretary who was an open and avowed Marxist: Emilio Castro. He had been exiled from Uruguay because of his political extremism, but he directed the WCC for seven years. During that time, Castro promoted KGB-authorized liberation theology, which encouraged followers to support Marxist dictators such as Hugo Chavez, Evo Morales, Manuel Zelaya, and Daniel Ortega as they transformed their countries into KGB-style police dictatorships. A 1989 KGB document boasted, “Now, the agenda of the WCC is also our agenda.”

Even after the Soviet Union collapsed, most of the international institutions built by the Kremlin survived and continued carrying out the same anti-U.S. messages that they always had. The World Peace Council, for instance, moved to Athens from Helsinki, but it was still headed by a KGB-selected chairman, Romesh Chandra, who, in the 1970s, required all WPC national branches to initiate demonstrations against the Vietnam War. According to its charter, the WPC has now “broadened into a worldwide mass movement” tasked with supporting “those people and liberation movements” fighting “against imperialism.”

The World Federation of Trade Unions (WFTU), the second-largest of KGB-crafted international institutions, also survived the collapse of the Soviet Union. It’s still headquartered in Prague and still uses anti-American rhetoric from the Cold War. It calls itself “the militant voice of 95 million workers in 130 countries.” This past November, responding to President Donald Trump’s concern about the caravan of migrants approaching the southern U.S. border, the WFTU posted on its website a “press release for the autorization [sic] of the USA government to shoot a caravan of immigrants at the borders.”

The release said, “These xenophobic and reactionary decisions of the USA bourgeois government cultivate the racism and hatred, hiding the true reasons of the migration; in other words, they do not say anything about the looting of the North American monopolies and the multinationals for the expropriation of the resources of Latin America …” You get the point.

Another KGB-cultivated group, the Women’s International Democratic Federation (WIDF), was founded in Paris in 1945, but was soon banned by French authorities and made to relocate to East Berlin, where it was supported by the communist regime. It adopted a new charter in 1995, demanding that the women of the world fight the globalization of the “so-called market economies,” which are “a root cause of the increasing feminization of poverty everywhere.”

Last year, the organization’s vice president, Skevi Koukouma, addressed an “anti-imperialist mobilization” outside of the U.S. Embassy, saluting on behalf of the WIDF “everyone all over the world demonstrating against the new attacks carried out by the U.S. and its allies against Syria.”

While these groups hide their true ties to Moscow, they continually advance ideas and programs that support the Kremlin’s causes. They are all excellent outlets for continuing communist disinformation. Perhaps modern communism’s biggest payoff, however, is from the World Council of Churches.

In 2009, Metropolitan Kiril (code name “Mikhaylov”), who had been an influential representative to the WCC and a member of its Central Committee, was elected patriarch of the Russian Orthodox Church. In addition to his roles with the WCC, records seem to establish that he had also been an active KGB officer. Little that he has done since his ascension as patriarch causes one to question that conclusion.

Kiril and other leaders of the Russian Orthodox Church openly supported Vladimir Putin during his presidential election campaign in 2012. Protesting that support is what led to the infamous arrest of members of the band Pussy Riot. For his part, Kiril described Putin’s election as “a miracle of God.” Presumably referring to the band, and he criticized those who were demonstrating for democratic reform, saying they were emitting “ear-piercing shrieks.”

Today, Putin casts himself as the savior of Christian values in Russia. He’s not, of course, unless those values include the assassination of political opponents (like Boris Nemtsov), the murder of critics (such as defector Alexander Litvinenko and journalist Anna Politkovskaya), and labeling the collapse of a murderous tyranny as the worst geopolitical disaster of the 20th century.

Putin, however, has been successful in convincing many people of this sham, due to his cult of personality in Russia, Metropolitan Kiril, the WCC, and mainly the Kremlin/communist experts who long ago figured out how to misuse international organizations for political purposes.