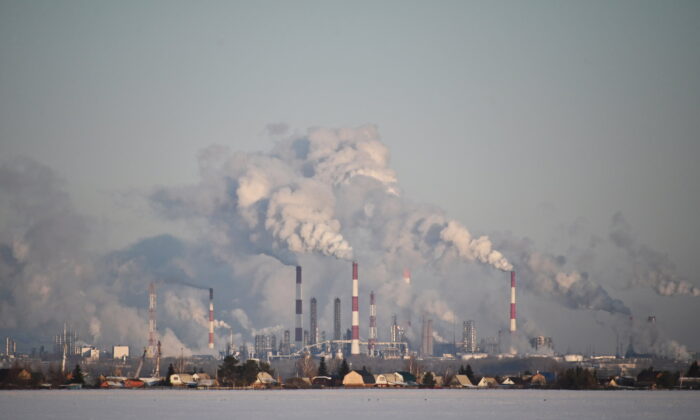 Global commodity prices skyrocketed on March 7, as the Russian–Ukrainian conflict has caused industrial buyers and traders to scramble for new sources of raw materials hit by supply disruptions.

Russia’s attack on Ukraine nearly two weeks ago has prompted massive sanctions against Russia by the United States and its Western allies.

The sanctions against Russia are the most sweeping ever experienced by a large economy.

Markets went on a rollercoaster Monday, with oil and metals prices going up and down as new developments hit trader screens.

Oil prices spiked after the United States, the United Kingdom, and the European Union said they were considering banning imports of Russian oil and natural gas.

The escalating energy crisis shook investors on Wall Street Monday morning, with the Dow Jones Industrial Average plunging more than 650 points, around 2 percent, while the S&P 500 and Nasdaq index were each down more than 2 percent in early trading.

Germany, which is reliant on Russian gas, has said it has no plans to stop energy imports from Russia.

The U.S. national average price of a gallon of gas surpassed $4 on Monday, breaking a 2008 record high.

According to some traders, some of the volatility is being fueled by speculators cancelling out bearish positions, but once buying ran its course, the prices fell.

Commodity markets have not just been shaken by the sanctions on Russia, but due to a breakdown in the logistical network that has blocked the flow of grain and metal from the region.

The sudden rise in raw material prices has sparked concerns in economies still recovering from the CCP-virus pandemic.

Russia is the world’s third-largest nickel producer, with roughly two-thirds of global nickel production used to make stainless steel and the rest for electric vehicle batteries.

Russia accounts for 10 percent of global nickel supply and 6 percent of the world’s aluminum output.

The market panic has spurred investors to buy up gold, which is regarded as a safe haven from turmoil in other markets.

Palladium rose 15 percent higher to an all-time peak of $3,440 an ounce. but later shed the gains into negative territory.

Russia accounts for 40 percent of global production of the metal, which is used by automakers in catalytic converters.

Copper and aluminum temporarily hit record highs, but fell and went into the red.

Wheat futures rose more than 7 percent to $1,294, hitting a 14-year high, as traders worry about the disruption the Ukraine conflict is having on supplies from Russia and Ukraine.

With the closure of Ukrainian ports and operators reluctant to trade Russian wheat in the face of financial sanctions, buyers are now searching for alternative suppliers.

Russia and Ukraine together account for about 29 percent of global wheat exports and 19 percent of corn exports.

“We are now talking to our European partners and allies to look in a coordinated way at the prospect of banning the import of Russian oil, while making sure that there’s still an appropriate supply of oil on world markets. That’s a very active discussion as we speak,” said Blinken to CNN on March 6.