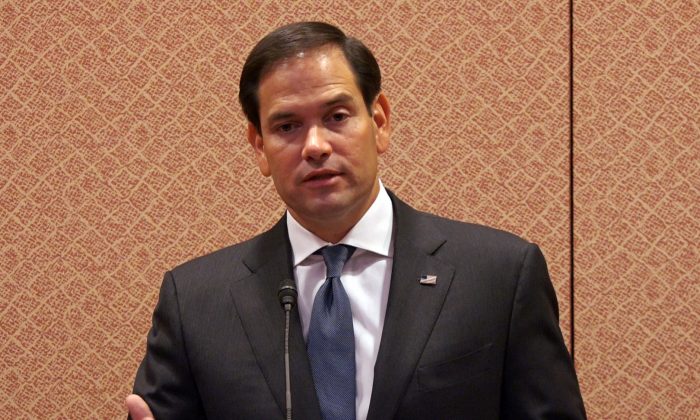 Chairman of the Congressional-Executive Commission on China, Sen. Marco Rubio, speaking at the release of the Commission's annual report in Washington on Oct. 5, 2017. (Wei Wu/NTD)
Chinese Culture

WASHINGTON—The news about human rights in China is not good, according to the just-released annual report by the Congressional-Executive Commission on China (CECC).

The CECC is tasked with monitoring human rights and the development of the rule of law in China, which it does through an annual report, but also through hearings, roundtables, and special projects.

At over 300 pages, this year’s report is comprehensive and detailed, covering human rights under 12 separate categories, ranging from freedom of expression to the environment, and the rule of law under four more categories. The report also has separate chapters on Xinjiang, Tibet, and Hong Kong and Macau.

In an event in the Capitol on Oct. 5 announcing the new report, co-chairman Rep. Christopher Smith said the report is an indictment of the Chinese regime. “In just about every area one looks at, there has been deterioration,” Smith said.

Yet, the Chinese people have not been quiescent even as repression has intensified.

Chairman Sen. Marco Rubio said, “As the Chinese government suppresses authentic religious expression, the number of religious adherents multiplies; as the government censors the internet, circumvention tools proliferate; as they brutally repress rights lawyers, their loved ones open up a ‘new line of struggle.’”

The CECC identifies four themes that run throughout the annual report: the continued use of law as an instrument of repression; the ongoing criminalization of China’s human rights lawyers; the intensification of restrictions on religion; the increasing uncertainty of the principle of “one country/two systems” in the administration of Hong Kong.

The CECC gives Congress an institution that continues the watchdog role performed by those annual debates.

The granting of PNTR, followed by China’s accession to the World Trade Organization in 2001, have proven to be a windfall for China, but not for human rights in that country.

As Rubio noted, “China has benefited immensely from the international rules-based order in driving its growth and lifting millions out of poverty, but the political reform many believed would accompany China’s economic transformation and accession to the World Trade Organization has failed to materialize.”

The CECC does not just monitor human rights and the rule of law in China, it seeks to promote human rights, by using its ability to spotlight specific developments.

Thus, while China sentenced the three most prominent student leaders of Hong Kong’s pro-democracy Umbrella movement—Joshua Wong, Nathan Long, and Alex Chow—to six to eight months in prison, the CECC is nominating these three and the entire Umbrella movement for a Nobel Peace Prize, and inviting members of Congress to join the nomination.

In April, the CECC announced the Free China’s Heroes initiative, which highlights the cases of political and religious prisoners believed to be detained or imprisoned in China. The initiative has a database of over 1,400 cases, which can be used by politicians or the general public who wish to champion the case of an individual.

The CECC dedicated its 2017 report to Nobel Prize laureate Liu Xiaobo, who died in July after the Chinese regime refused to allow him to travel to receive treatment for liver cancer.

Rubio described the CECC’s strategy of using the annual report to raise awareness in the case of forced organ harvesting from Falun Gong practitioners in China.

“One of the points of putting together a commission report is to make that information [about organ harvesting] available,” Rubio said. “And hopefully use that to heighten awareness of it here and in international forums, in government and outside of government.”

One of the report’s recommendations calls for the United States to develop a national strategy regarding human rights in China.

In the cover letter for the copy of the report delivered to President Donald Trump, Rubio and Smith say, “Principled U.S. leadership is needed to develop a long-term policy approach that challenges China to abide by its international commitments, adhere to universal standards, and embrace the rule of law.”

They say the report  “urges the Administration to develop an action plan that will … prepare all agencies to pursue measurable, results-orientated human rights and rule of law outcomes.”

“A freer and more democratic China is a critical U.S. interest and this goal should be pursued in tandem with other U.S. diplomatic, economic, political, and security priorities,” say Rubio and Smith.

Those suffering from human rights abuses in China are also asking Trump for help.

They came to give witness to the fates of those who have spoken out for human rights in China.

Jin Bianling, the wife of Chinese human rights lawyer Jiang Tianyong, spoke after the event of how she and Jiang’s other family members are very worried about the torture he has been subjected to in prison.