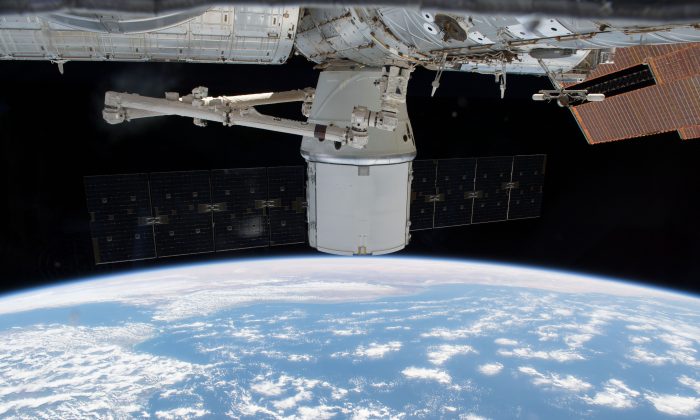 The SpaceX Dragon resupply ship was gripped by the Canadarm2 robotic arm at the International Space Station on April 27, 2018. (NASA)
Business Columnists

Commercial Space Race Is Getting Hot

Of the three private space mavericks here on planet Earth, Richard Branson seems to be the forgotten explorer.

In July 2021, Sir Richard and five other crew members climbed aboard Unity 22 and blasted skyward to personally explore the edge of gravity.

Since then, things have been pretty quiet from the company—until recently.

Barron’s recently noted that the line for space tourism is open. But it’ll probably be a short one. The article said, “Space flight isn’t going to be cheap. The ticket price listed is $450,000 with a $150,000 deposit.”

That’s $450 million in revenue if they can sell all 1,000 seats. And considering top-line sales in 2019 were just under $4 million—probably all from Virgin Galactic t-shirt sales—that’s a meaningful number.

Of course, only a handful of passengers can fit on each flight… it’ll be a while before they realize all that revenue, assuming they can sell it.

Nevertheless, the headline pushed the space industry back into the spotlight.

While this kind of opportunity might seem like a frivolous exercise to entertain factions of the super-rich, it’s really not. Space, as William Shatner—who recently took a hop on Jeff Bezos’ Blue Origin—used to say, “is the final frontier.”

It’s where we “slip the surly bonds of earth.”

By way of a little background, most of space as we understand it is actually still within the Earth’s atmosphere. Our atmosphere is divided into several levels: the troposphere, the stratosphere, the mesosphere, the thermosphere (which included the ionosphere), and the exosphere.

Which is where both Branson and Bezos’ rides end.

They launch their rockets to what’s technically the edge of space—the 55- to 60-mile range. (For scale, Red Bull daredevil Felix Baumgartner, skydived from 23 miles above the earth. The moon is 236,000 miles from Earth.) From that altitude you can experience weightlessness and see the curvature of the earth for a few minutes before you start heading back down.

I have no doubt the experience is spectacular. But it’s still kind of like your mom telling you you’re not allowed to leave the backyard.

The other space cowboy, Elon Musk, on the other hand recently sent 4 “civilian astronauts” into orbit—some 367 miles above Earth (higher than the International Space Station)—for three days and returned them safely.

Too Much of a Good Thing

This is not to minimize any of these efforts. There’s a lot of room to explore space. But it’s starting to get crowded out there.

Musk’s other space business, the internet business Starlink, has been busy launching satellites into space for the past couple of years. He’s already in the process of launching 12,000 satellites and is asking the FCC for authorization to send up 30,000 more.

NASA responded to SpaceX’s plan saying that, “the 30,000 devices, if deployed, would significantly boost the number of tracked objects in space—by a factor of more than five in certain lower orbits.”

Maybe it is safer for Branson and Bezos to keep their tourists “in the backyard” and away from Musk’s rapidly growing junkyard.

For its part, SpaceX has maintained, “it has made significant investments in more capable satellites and adopted a careful approach to protect the lower bands of Earth orbit.”

And in fairness, it’s not just Musk cluttering up space. China, Russia, and every other country with a semi-advanced economy or a spy program has been sending stuff up there for years. Bezos and Amazon are doing it too.

Faced with all the other headlines about inflation and the Fed day after day, we probably give this kind of news little thought. It seems almost frivolous. But, these efforts are showing us the future.

Space has finally gone from being solely the dominion of government to reaching the private sector—a place where it can actually become part of our world down here on Earth.

Entrepreneurship is what drives our economy to new levels of growth and prosperity. And these companies are leading the way.

Unfortunately for investors, your options are limited. Neither Bezos nor Musk have a specific space investment vehicle. Virgin Galactic Holdings reflects an option for forward-looking investors. Another option is Cathie Wood’s ARK Space Exploration and Innovation ETF.