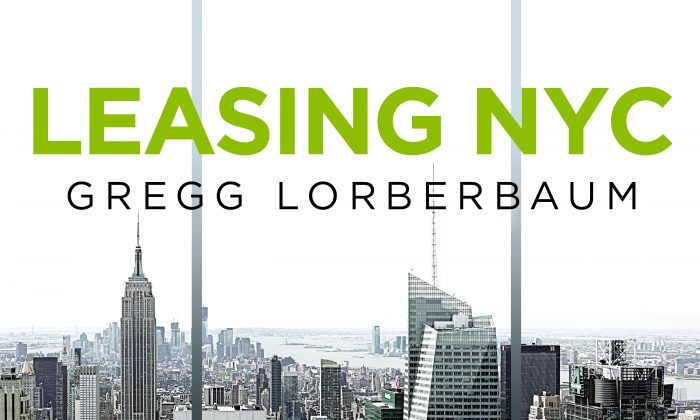 NEW YORK—Gregg Lorberbaum got the idea for his book when he got stuck in an elevator.

He overheard two executives talking about the office leases they had just signed in the building. When they compared their costs per square foot, one was outraged to find that he was paying $12 dollars per square foot more than the other.

Lorberbaum listened carefully and went back to do some research. It turned out that the executive who was paying more per square foot was actually paying $3 million less per year in final costs.

That executive’s situation is not uncommon in commercial real estate leasing. Price per square foot is just one among a dozen other variables that affect the final all-in costs of leasing an office space, according to Lorberbaum, founding partner of Centric Real Estate Advisors.

“People have no idea if they got a good deal or not,” said Lorberbaum. “I said people don’t really understand it, and I’m going to write a book about it.” Thirty years of experience navigating the complex world of commercial real estate leasing for his clients has gone into the book.

After two years and thousands of hours of work, in March Lorberbaum released “Leasing NYC,” a definitive guide to managing a move to a new office space.

It is a beautiful coffee-table book filled with stunning photographs of Manhattan’s skyscrapers and prime office spaces, courtesy of photographer Adrian Wilson.

The Man Behind the Book

Lorberbaum has represented corporate clients in New York City for more than 25 years in transactions totaling over 10 million square feet. He worked with companies like KPMG LLP, Morgan Stanley, Janus Funds, Baron Capital, and MJ Whitman. Over the course of his career Lorberbaum says he has saved his clients an average of 5 percent on their total rent costs.

Outside of work, Lorberbaum is a family man. He married his kindergarten sweetheart and has three children, two of whom are in college. He goes to the gym every day and hasn’t missed an entry in his journal for 30 years. He owns a brokerage company, a consulting practice, and an executive suite business.

Lorberbaum was born and raised on the South Shore of Long Island and lives in Westchester. He considers New York City the “functioning capital of the world.”

“Leasing NYC” goes to extraordinary depths to educate readers about all of the pitfalls and intricacies associated with leasing commercial space.

“A lot of people who read the book are struck by how comprehensive it is,” said Lorberbaum. “It’s designed to be a complete training program for people in the industry.”

The book is best suited for commercial real estate brokers as well as corporate executives tasked with finding a new office space.

Lorberbaum said that finding a great space for your employees is not about paying more. A light-filled, well-designed office, with an abundance of creature comforts can decrease employee turnover, a major expense considering the cost of training and hiring.

“The way we use office space has dramatically changed,” said Lorberbaum.

A 2008 study by Gensler found that the modern office is increasingly being used for socializing, learning, and collaborating. Office spaces that accommodate these essential activities can reduce employee turnover.

The features include: operable windows, great lighting, a big lunchroom where employees will stay and socialize, an employee lounge, and a gym, among others.

“These kinds of creature comforts aren’t there because people want to be nice. They’re there because they want to improve morale,” said Lorberbaum.

Lorberbaum doesn’t feel that giving out a career’s worth of advice in a book is any loss. His firm is small and can only handle a limited number of clients per year.

Meanwhile, people who aren’t his clients can use the knowledge distilled in the book to save hundreds of thousands of dollars on their rental costs.

Lorberbaum said that it was his generosity of spirit that played a major motivating role for writing the book.

“I do care about making money, but at this point I care more about being a good person. I find that if you treat the world as though everybody is someone else’s child then you’re a lot more compassionate,” said Lorberbaum.