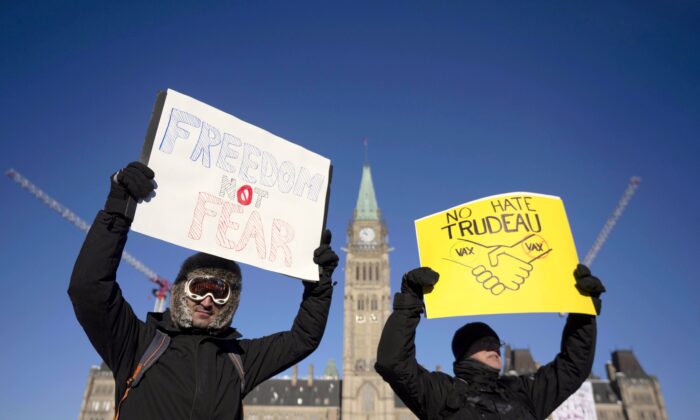 Commercial Fishermen May Lend Support to Trucker Protest in Ottawa, While Additional Convoys Rally Locally Across the Country

Sailing a modest-sized fishing boat called the Lobster Stalker out of Yarmouth, Nova Scotia, Derek Colier battles frigid weather, sleepless nights, and angry seas almost daily when he treks into the Atlantic Ocean hoping to get enough of a haul to justify his honest living.

A former truck driver, Colier understands the lifeblood both the trucking and fishing industries bring to Canadians. And if the truckers need some help in their protest against government restrictions and mandates, he said he’s ready to rally the back-up support.

“This is something we can make happen if they need us to,” Colier said in an interview. “If the truckers want a back-up plan, and if they ask for it publicly, I think you’re going to see large amounts of commercial fishermen step forward for this.”

Colier began his drive to recruit other fishermen on Jan. 27 and worked at it late into the evening. And while he admits he can’t make a fishing convoy happen in one night, the industry has the ability to make a statement quickly and choke off ports all around the Maritime provinces and up the St. Lawrence Seaway if necessary.

“We have 900 boats in our district alone, and there’s 16 different districts in Nova Scotia. You want to gather some people up, we just have to get on the same page,” he said.

On the other side of the country, truckers who couldn’t join the main protest in Ottawa this weekend are rallying locally in support of ending vaccine mandates and all COVID-19 restrictions. Vancouver and the Fraser Valley have a support convoy starting Jan. 29, snaking through Vancouver’s downtown core before finishing 100 kilometres away in Chilliwack, B.C., on Jan. 30.

One of the Trucker Support Convoy organizers estimates at least several hundred vehicles will participate based on the calls he has received.

“We’re going to snarl up traffic like nothing you’ve ever seen,” Stacey Midgley told The Epoch Times. “I’m very passionate about this. And this is just the beginning. This is because all of us right now, we’ve started together as one and we will get this done.”

Across Canada, other communities are showing solidarity with the Freedom Convoy 2022 with convoys of their own, including groups rallying at legislative buildings in Victoria, Regina, and St. John’s.

Jamie Olmstead is one of the organizers for the Regina rally. Speaking to The Epoch Times from her home in Moose Jaw, she said more than 300 rigs had confirmed their participation from around the province, including as far away as Lloydminster. And the trucks that can’t make it to Regina are joining smaller convoys in other towns around Saskatchewan.

“We didn’t realize how big this was going to get,” Olmstead said. “When we thought we wanted to get this going, we just wanted it to be a support system. We had to get permits, we had to get Regina police to start an escort for us. It has gotten so big.”

In St. John’s, Cherie Butler has been working to mobilize a Newfoundland and Labrador convoy since Jan. 25, and the response has been encouraging.

“I think we’re going to have a really good turnout,” she told The Epoch Times.

“A lot of people had been afraid to speak out for fear of backlash and I think this [Freedom Convoy] has given them the comfort in knowing there’s a lot of support out there. So while they’re rallying in Ottawa, we need to be rallying here in support of our truckers. They’re doing this for us so the least we can do is to just throw our love and support behind them 100 percent.”

Former Newfoundland premier Brian Peckford, who filed a lawsuit against the federal government on Jan. 26 over mandates restricting travel for Canadians without a COVID-19 vaccination, is in favour of the support convoys, urging Canadians to peacefully gather at legislatures across the nation.

“We should have tens of thousands at every legislature in the country,” he said in an interview. “It’s an absolute disaster what’s going on.”

Social media sites in support of the protest continue to emerge, including the official Freedom Convoy Instagram account which grew from 20,000 followers on Jan. 25 to more than 310,000 followers three days later.

Posts are littered with images as convoys from Prince Rupert in B.C. to St. John’s in NL converge in Ottawa where thousands of people were already engaging in pre-rally gatherings on Jan. 28.

Many communities amassed hundreds of kilograms of food for the convoys, including significant contributions from Vaughan Mills, Port Hope, and London, Ontario.

The group Action4Canada, with its motto, “We are committed to protecting… faith, family and freedom,” launched its own campaign in support of the Freedom Convoy with a call for peaceful non-compliance on Jan. 31, urging Canadians to take off their masks and for businesses to disregard the vaccine passports.

Chief Freedom Convoy organizer Martin Brodmann expected nationwide support, but says he was overwhelmed on his journey through New Brunswick and Quebec on the way to Ottawa.

“Every overpass we drive under is packed, and not just with people, but with farmers and their farm equipment. I’ve never seen anything like this,” Brodmann told The Epoch Times.

“Mr. Global has a plan to take our freedoms away, but Mr. Global didn’t take into account that the people were going to stand up to him. And they are. And while truck drivers bring every imaginable thing to all of us every day, today they are delivering the most important cargo of all: hope.”