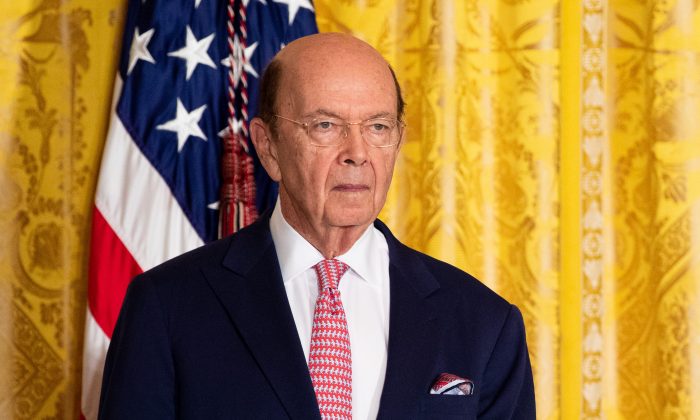 Commerce Secretary Wilbur Ross in the East Room of the White House on June 18, 2018. (Samira Bouaou/The Epoch Times﻿)
US News

The Department of Commerce has opened an official investigation to determine whether America’s reliance on foreign imports of uranium poses a national security risk.

The probe, under Section 232 of the Trade Expansion Act of 1962, was prompted following concerns raised by two U.S. uranium mining companies.

The United States relies on imports for 93 percent of its uranium. Thirty-two percent comes from Russia, Kazakhstan, and Uzbekistan.

“Increasing levels of state-subsidized nuclear fuel are expected to be imported from Russia and China in the coming years, which would likely further displace U.S. uranium production,” said American uranium mining companies Energy Fuels Inc. and Ur-Energy Inc. in a statement.

The companies have blamed the drop in U.S. domestic production on foreign nations’ subsidies for uranium production.

A controversial deal that allowed Russia to take a majority stake in Canadian mining company Uranium One, which at the time controlled 20 percent of mineable uranium in the United States, was approved by the Obama administration in 2010.

According to the U.S. Energy Information Administration, the United States has only one operating uranium mill left, Utah’s White Mesa Mill.

According to the agency, domestic production of uranium concentrate fell by as much as 16 percent in 2017. It now is at its lowest point since 2004.

Uranium is used by nuclear power plants and for the production of nuclear weapons as well as other defense-related purposes.

“The Department of Commerce’s Bureau of Industry and Security will conduct a thorough, fair, and transparent review to determine whether uranium imports threaten to impair national security,” Commerce Secretary Wilbur Ross said.

Previous probes under Section 232 on steel and aluminum imports have led to tariffs and quotas on the metals. The Commerce Department is also conducting a Section 232 probe into automotive imports.