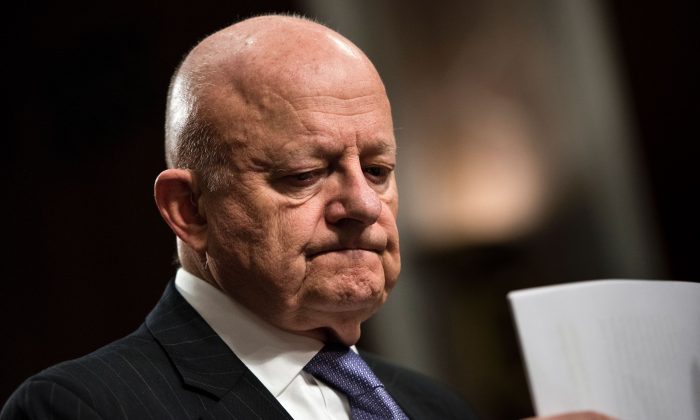 Former Director of National Intelligence James Clapper during a hearing of the Senate Armed Services Committee on Capitol Hill on May 11, 2017. (BRENDAN SMIALOWSKI/AFP/Getty Images)
Trump Administration

Commentary: Trump Would Be Right to Revoke Security Clearances of Former Officials

The announcement was reportedly met with an audible gasp in the White House press room.

Revoking the security clearances of former top officials, who now regularly appear on television attacking the current administration, makes a lot of sense.

After leaving office, these officials have in essence become political actors who spread disinformation into society.

The officials singled out by the White House include those who have admitted to leaking classified information, have had questionable relations with media while in office, or have been referred for criminal investigation over their actions.

Former FBI Director James Comey, for example, has proven to be a leaker of secret government information.

He admitted as much under oath before Congress in June last year when he admitted giving memos recalling conversations with President Trump to a friend with the intention of leaking them to the media.

Many of those memos were later proven to have been marked “Secret/Noforn” and “Confidential/Noforn.”

The memos were leaked by Comey’s friend to The New York Times, which in turn used it to attack Trump.

Leaking of classified information is punishable by up to 10 years in prison.

In the case of former Deputy FBI Director Andrew McCabe, he was referred for criminal investigation by the Justice Department’s Inspector General for lying about leaking information to the media.

An investigation by the IG had found that McCabe had made unauthorized leaks to the media “designed to advance his personal interests at the expense of Department leadership.”

Lying to federal investigators is punishable by up to five years in prison.

Former director of national intelligence James Clapper also appears to have lied to congressional investigators about having leaked information to CNN, who he now works for as a contributor.

“Former DNI Clapper flatly denied “discuss[ing] the dossier [compiled by Steele] or any other intelligence related to Russia hacking of the 2016 elections with journalists,” a report by the House intelligence committee reads.

“Clapper subsequently acknowledged discussing the “dossier with CNN journalist Jake Tapper,” and admitted that he might have spoken with other journalists about the same topic,” the report reads.

The conversations between Clapper and Tapper took place in early January 2017. On Jan. 10, 2017, CNN published a story citing U.S. officials that President Trump had been briefed about the contents of the dossier.

That news hook, which likely came from Clapper, was what news organizations around the world used to report on the unverified dossier.

Comey admitted in one of his memos, which have since been declassified and made public, that CNN needed “a news hook” to be able to report on the dossier.

Media could not report on the dossier without a credible news hook as the dossier’s contents were outrageous, unverified, and potentially libelous.

After leaving office, Clapper was hired by CNN as an analyst.

These few examples underscore the problematic nature of former officials having security clearances. They still have legal access to secret information while having proven to have misused this power.

Taking away their security clearance will not only send a strong message, it will also take away the implied credibility of some of their attacks on the current administration.

Furthermore, it will make them subject to prosecution, just like any other citizen would, for improperly obtaining and distributing classified information.