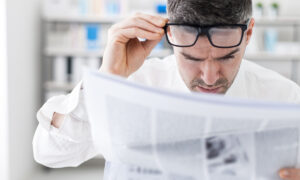 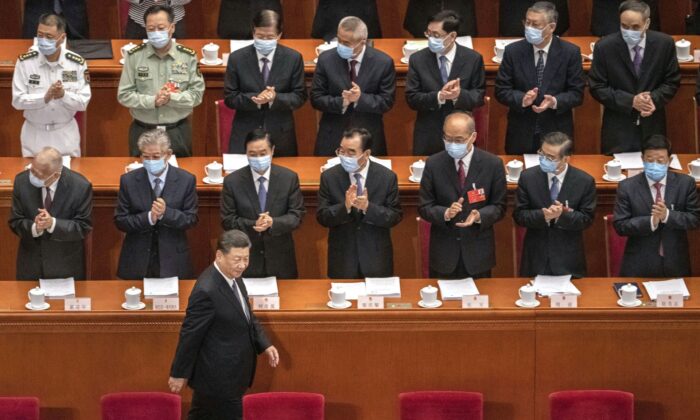 Chinese president Xi Jinping is applauded by delegates wearing protective masks as he arrives at the opening of the National People's Congress at the Great Hall of the People in Beijing, China on May 22, 2020. (Kevin Frayer/Getty Images)
Viewpoints

China’s Economy at a ‘Juncture in History,’ State Media Proclaims

An article by Chinese state media Xinhua News titled, “A Preview of the 2021 Two Sessions: China’s Signals at a Juncture in History,” was recently posted in the exclusive spot reserved for coverage of Xi Jinping, meaning it carried unusual weight.

The article’s title directly points out that this is a preview of the 2021 Two Sessions, which naturally serves the purpose of spreading the CCP’s propaganda and setting the tone for the Two Sessions.

The wording “juncture in history” is intriguing. However, it’s difficult to say whether it implies an opportunity or a challenge. The article does not present any content of opportunities, and the “signals” released are hardly bright, more like a temporary respite under heavy pressure.

China has indeed reached a critical “juncture” in its history, which is also a critical point for the survival of the Chinese Communist regime. The CCP’s top echelons have clearly felt it, and the 2021 Two Sessions are being held against this backdrop. The Xinhua article precisely reflects the mindset of the top echelons of the CCP.

In an attempts to predict the “direction and path” at this important “historical juncture,” the article presents the six major objectives laid out in the 14th Five-Year Plan: “new achievements in economic development, new steps in reform and opening up, new improvements in social civilization, new progress in ecological civilization, new levels of people’s well-being, and new improvements in the effectiveness of government governance.”

The word “new” is used with each of the six objectives, but there is nothing new in their content. These objectives come in handy every year, every five years, or every 10 years. The article doesn’t specify any substantive kind of direction or goal, only vague phrases. The top CCP leaders are clueless, and the Xinhua reporters are certainly not able to come up with anything new.

But according to the article, “challenges and opportunities co-exist in 2021, especially as numerous uncertainties still remain regarding the epidemic and the international environment.”

The situation is difficult to determine and, naturally, so are the goals and directions. The article quotes Zhang Liqun, a research fellow of the Development Research Centre of the State Council, as saying, “China’s economy has the potential and resilience to maintain a certain growth rate,” but “the core purpose is not to pursue good-looking figures.”

Zhang’s statement can be taken as the number one official propaganda that’s setting the tone for the economy before the Two Sessions, and although it’s foreseeable that China’s GDP figures will continue to weaken, mention of it cannot be left out.

It also shows that the CCP’s top leaders have no confidence in China’s economic development. In 2020, a growth rate of 2.3 percent was barely met, and it would be equally hard to come up with a similar figure in 2021. The article also quotes the expert as saying that the Central Economic Work Conference late last year emphasized “stability” and the need to “promote a sustained economic recovery.”

The Central Economic Work Conference is the CCP’s top-level decision and policy-making mechanism, convened by the CCP’s Central Committee and the Chinese regime’s State Council.

According to CCP propaganda, with a positive growth of 2.3 percent in 2020, China’s economy has taken the lead in recovery and should continue to grow in 2021. So how will it continue to recover? The veiled language of the Xinhua article let the cat out of the bag.

Apparently, agriculture has something to do with the growth, but apart from mentioning the need to consolidate “poverty alleviation,” nothing more was said on this issue. Xinhua News Agency maintains an agreement with the CCP, and after the fake “poverty alleviation” problem is settled, farmers are left to their own devices again.

The article goes on to eulogize the results of epidemic prevention and quotes Zhang Wenhong, an expert of infectious diseases at Huashan Hospital, affiliated to Fudan University, as saying, “It is believed that this year, although it’s difficult to avoid local sporadic cases, we can generally avoid a significant rebound of the epidemic.”

After these two key points on the economy and the epidemic were settled, the article again mentions “stability on the six fronts and security in the six areas,” saying, “the employment issue is in the first place, and the focus is still on college graduates, migrant workers, and other employment groups and employment guarantee for difficult groups.”

This shows that the problem of unemployment in mainland China is so serious that the CCP’s media dare not ignore it. How many of the 8.74 million college students who graduated last year are employed? In four months, another 9 million-plus students will be graduating, and last year’s graduates are still having a hard time finding jobs.

As for the migrant workers, it’s estimated that there is no hope for them, and the Spring Festival travel rush is expected to disappear. The authors of the article didn’t have any solution, so they quoted Xu Guangjian, a professor at Renmin University of China School of Public Administration and Policy, who falsely claims that “gig economic groups have proliferated in the Internet era, and laborers have shifted from ‘company + employee’ to ‘platform + employee’ mode.” If true, ordinary Chinese citizens should have personal experience in this, and they should also be aware that the CCP can fabricate economic growth numbers. But covering up the unemployment problem is more difficult to do.

The article could only continue to talk about and praise the domestic economy or “internal circulation,” claiming that the Chinese market is still “favored” and will “open up to the outside world,” quoting Ji Zhiye, a member of the Chinese People’s Political Consultative Conference and former president of China Institute of Contemporary International Relations.

But in terms of “opening up,” the article only mentions that the Asia-Pacific Free Trade Agreement (RCEP) was signed last year and that the Comprehensive Agreement on Investment negotiations have been completed as scheduled. And that’s it. It does, of course, not mention anything about the CCP being isolated by the international community.

The CCP’s mouthpiece media has openly declared that China is at a “historical juncture,” but the top CCP members have difficulty assessing the situation, let alone having any solutions to respond to the situation. The Xinhua article tries to set the tone for the Two Sessions, but it fails to give any direction at this critical moment and is actually just releasing a continuous negative signal. The 2021 Two Sessions delegates may find it difficult to play their roles.

Yang Wei has been following China affairs for many years. He has contributed China commentaries to the Chinese language Epoch Times since 2019.