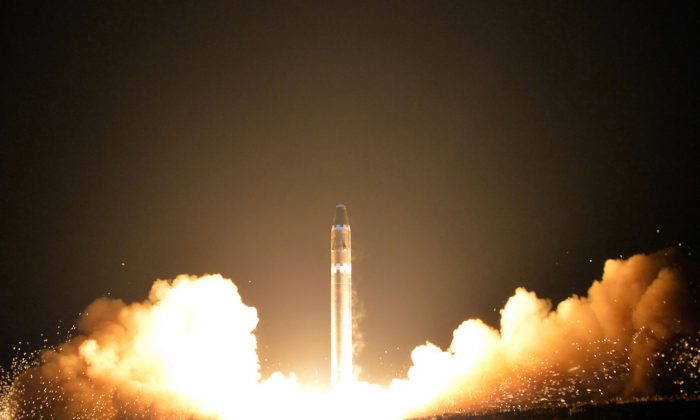 This photo taken on Nov. 29, 2017, and released on Nov. 30, 2017, by North Korea's official Korean Central News Agency (KCNA) shows launching of the Hwasong-15 missile which is capable of reaching all parts of the U.S. (AFP PHOTO / KCNA VIA KNS)
Asia & Pacific

The United States and South Korean jets were honing their combined combat skills in massive annual air drills when a foreign affairs spokesman for North Korea announced that war is inevitable.

North Korea has threatened to strike the United States mainland as well as Japan and South Korea with nuclear weapons for months.

It’s a threat that the United States has taken seriously.

“There are ways to address this problem short of armed conflict, but it is a race because [Kim’s] getting closer and closer, and there’s not much time left,” he said.

On Nov. 29, Graham, who sits on the Armed Services Committee, told CNN that war on the Korean Peninsula would see many people hurt and killed but it may be the only option.

“We’re not going to let this crazy man in North Korea have the capability to hit the homeland.”

“If there’s a war with North Korea, it will be because North Korea brought it on itself, and we’re headed to a war if things don’t change.”

Defectors from North Korea describe being forced to treat Kim Jong Un and his forefathers with reverence. Insulting the Kim family is a serious crime in North Korea, and the regime strictly enforces a cult of personality surrounding the family line. That includes spending tens of millions of dollars on statutes and paintings commemorating the Kim family and posting guards to protect these idolizations from vandalism.

Ongoing U.S. military exercises in the region, combined with the “violent war remarks” make the “outbreak of war on the Korean peninsula an established fact,” an unnamed spokesperson said during an interview a North Korean news outlet on Dec. 6.

“The remaining question now is: when will the war break out.”

The spokesperson’s statement suggests the Kim regime will not stop its nuclear program, even at the risk of regime change, which is widely held as the inevitable outcome of a U.S.-North Korea war.

The spokesperson said the current U.S. administration has already decided to provoke a war on the Korean peninsula and is taking “a step-by-step approach to get there.”

From the United States perspective, each of those steps has been a response to continued North Korean provocations, including its nuclear bomb tests and ongoing missile development program.