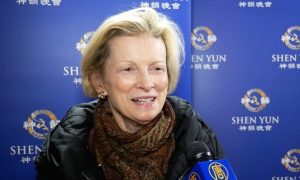 As much as Star Wars fans usually flood the Comic-Cons, with the new sequel “Star Wars: The Force Awakens” coming in just a few months the hype has escalated to a whole new level.

The 2015 Comic-Con in Sand Diego, a festival of everything sci-fi and fantasy, had a lot to offer to Star Wars fans: panel discussions with actors and creators, sneak previews, and limited merchandise.

But what Comic-Con fans love most of all is dressing in elaborate, true-to-original, and outright over the top costumes. They show up all decked out as their favorite movie, TV, manga, anime, video game characters.

And in the dress up department, the Star Wars theme occupied a massive part of the 2015 festival universe.

Visitors could easily take a selfie with a Darth Vader-clad man hardly distinguishable from the movie costume, or run into a female variety of Darth Vader, complete with a pink helmet and a pink bodysuit.

Perhaps most innovative was the group of ladies masked as female Wookies—a very, very hairy species of the Star Wars universe—roaming the premises, calling themselves “Chewie’s Angels,” a tribute to the best-known Wookie Star Wars character, Chewbacca.

The “Star Wars” original cast Harrison Ford, Mark Hamill, and Carrie Fisher made an appearance receiving a massive reception from the stadium full of fans. All three are re-cast in their original roles in the upcoming blockbuster, together again with original director J.J. Abrams.

Still, very few new pieces of information about the movie were released.

The juiciest nugget was probably the name of the command center of one of the main villains of the movie—General Hux. Domhnall Gleeson, who plays the character, leaked the name, perhaps accidentally, as “Starkiller Base.”