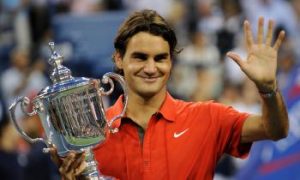 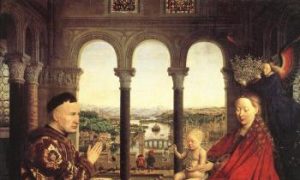 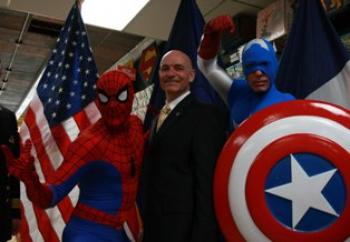 By Tara MacIsaac
Print
NEW YORK—Holy stop, drop, and roll Batman! That's what Robin might have said if he were at Midtown Comics near Times Square on Tuesday. Fire Commissioner Salvatore J. Cassano handed out a comic book featuring fire-starting foes and fire-fighting heroes—a not so diabolical ploy to teach kids about fire safety.

Batman and Robin were at a conference in Washington D.C. and couldn't make it, but Spiderman and Captain America were there alongside Hot Dog, the Fire Department of New York's (FDNY) canine mascot. A bunch of little heads in red fireman helmets looked up to the super heroes in more ways than one.

Ms. Millers grade two-three split class from Elias Howe P.S. 51 in Hell's Kitchen came to learn about how to keep their families safe.

“[The children] are our lifeline. When we get to the children, they get home and they tell their parents what to do and what not to do. We're all safer for it,” said Cassano.

A child started a fire in a Bushwick, Brooklyn, home last week while playing with a lighter. A 5-year-old boy and 3-year-old girl were killed in the blaze, as well as a 52-year-old man. This tragedy highlights the importance of educating children about fire safety said the commissioner.

The best way to educate is to engage, and what catches the attention of an 8-year-old better than Spiderman and Captain America?

“We had to get our best characters, so it couldn’t be just Spiderman, it couldn't be just Captain America, it had to be the whole avengers—Hawkeye and Mockingbird, and Powerman, and Iron Fist and Miss Marvel altogether!” declared an expressive and enthusiastic Marvel Comics editor, Bill Rosemann. The words Pow! Bam! Kablazz! Seemed to pop up around him as he stuck a handout here and pumped a fist out there during his speech to the kids.

In the comic book, Piledriver, Thunderball, Bulldozer, and the Wrecker—the whole Wrecking Crew—bust in on a fire-safety education session at the Avengers Mansion. While the rest of the crew distracts the Avengers, Wrecker starts a mighty blaze in the mansion's generator. Luckily the kids visiting the Avengers' mansion remember their safety tips and get themselves out safe and sound.

“I often use candles in various marital art disciplines. … But I never leave a candle unattended. Ever,” Iron Fist tells the kids.

The children are safe, but what will become of the Avengers still exchanging taunts and blows with the Wrecking Crew? It's a cliffhanger, and kids have to visit www.FDNYFoundation.org to find out more—they might just come across some more safety tips there.