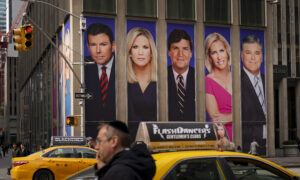 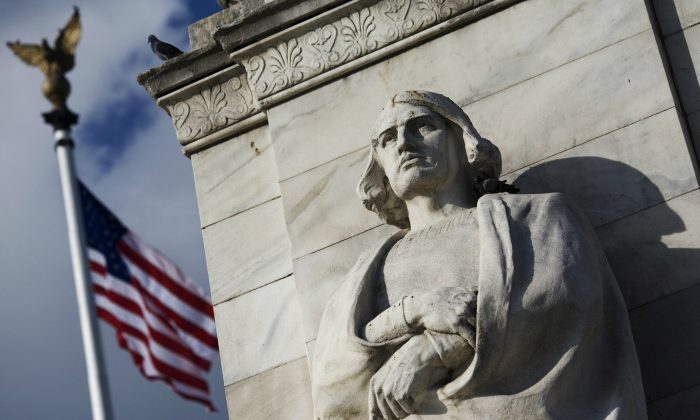 The statue of Christopher Columbus at Columbus Circle in front of Union Station in Washington, D.C. (MANDEL NGAN/AFP/Getty Images)
Viewpoints

Oct. 12 is the traditional date on which Americans celebrate Columbus Day. It commemorates the anniversary of Christopher Columbus’s arrival in the Americas in 1492. In 1892, President Benjamin Harrison marked the 400th anniversary of that date with “a general holiday for the people of the United States.”

Colorado Gov. Jesse F. McDonald proclaimed the first annual Columbus Day in 1907. Two years later, the New York state legislature followed suit. By 1910, 15 states had officially adopted the holiday, and it was made a federal holiday in 1934 by President Franklin D. Roosevelt. In 1971, it was moved to the second Monday in October so that workers could enjoy a long weekend.

The recognition of Columbus Day as a federal holiday was due, in part, to support from Italian-Americans and the Catholic men’s organization Knights of Columbus. At a time when much of society considered immigrants and Catholics to be “outsiders,” these groups sought to make clear the role that their forebears had played in American history.

Protestant America looked at Catholics with suspicion. In the mid-1800s, the Know-Nothing Party (so named because when asked about the group, members professed to “know nothing”) strongly opposed Catholic immigration. This was at a time when the pope controlled the Papal States. Some feared a “Romanist conspiracy” that would involve Catholics taking over the nation and putting it under the Pope’s rule.

The Know-Nothings largely disappeared with the Civil War, but by the 1920s, the anti-Catholic and anti-immigrant banner was being held high by the Ku Klux Klan. KKK members saw Columbus as a logical target because he was Catholic, Italian, and sailed under the Spanish flag. They mobilized to stop the erecting of statues, burned crosses to threaten Catholics, and wrote in their newspaper, The American Standard, that establishing a holiday in his honor was a papal plot.

The 1934 recognition of Columbus Day was a loss for the Klan but served as recognition of the important contributions made not only by Italians and Spaniards, but the Irish, Greeks, Eastern Europeans, and others. They were Americans, too. For the next 50 years or so, Americans celebrated Columbus Day with parades and events in schools and elsewhere without much controversy.

Eventually, however, the criticism came.

The first and most obvious criticism: He did not actually “discover” America.

Viking Leif Eriksson is believed to have landed in present-day Newfoundland around 1000 A.D. Of course, people already were living on the continent even before the Vikings arrived. The importance of Columbus is that he located the New World for most Europeans, and he made three more trips after returning the first time. That was a big deal. It was important, and he was courageous.

The next criticism was that Columbus actually failed. His plan was to chart a western sea route to China, India, and the fabled gold and spice islands of Asia. Of course, he did not make it there. There was a continent—actually two—in his way. Alexander the Great famously ordered his troops to “march off the map”—in other words, to explore the unknown. Columbus sailed off the map with his men, boldly going where no one had gone before. Surely, he can’t be criticized for that.

There is also the argument that he never actually set foot in North America. During the four separate trips that started in 1492, Columbus landed on various Caribbean islands now known as the Bahamas, Cuba, and Hispaniola. Is that a significant criticism? Was it important to the Europeans of his day? It doesn’t seem so.

That leaves the real question being Columbus’s treatment of the natives he encountered. He has been blamed for the spread of slavery, infectious disease, and forced conversion to Christianity. The historical evidence shows him to be a much better man than these arguments suggest.

As for spreading diseases, anytime a new element is introduced to an existing culture, there is a risk of spreading infectious diseases. In Hispaniola, the native Taino population had no immunity to smallpox, measles, or influenza. So, when Europeans showed up, the results were devastating. Some historians have compared it to the impact of the Black Death in medieval Europe.

This can’t, however, be used as a reason to condemn Columbus’s exploration. It was an unintended result.

The explorers themselves contracted and suffered from a number of new diseases, and they inadvertently took them back to Europe. They also encountered tobacco for the first time, and they took it back to Europe from the New World. No one can honestly blame the natives for unleashing all of the harm that has caused.

Slavery was practiced in Spain at the time Columbus sailed. In fact, during this time, Spain probably had the highest concentration of African slaves in all of Europe. Columbus was a man of his era, and he didn’t attempt to change that. His relations with the natives, however, like his intentions toward them, were generally good. There are many examples in his writings where he gave instructions to his men not to maraud or rape and instead to treat natives with respect.

Columbus felt that Almighty God had directly brought about his journey. He wrote: “With a hand that could be felt, the Lord opened my mind to the fact that it would be possible … and he opened my will to desire to accomplish that project. … The Lord purposed that there should be something miraculous in this matter of the voyage to the Indies.”

As was typical of most Spanish crews, Columbus’s men recited the “Our Father” daily, but his faith went well beyond that. His son, Ferdinand, reported that “he was so strict in matters of religion that for fasting and saying prayers he might have been taken for a member of a religious order.”

A contemporary of Columbus, Bishop Bartolome de Las Casas, recognized the injustice of slavery. He wrote an eyewitness history of the early years in which he strongly criticized many fellow Spaniards, but he didn’t condemn Columbus.

In fact, he wrote: “He was calm and serious, friendly to strangers, gentle and kind to his family. … In nearly everything he undertook to plan or to accomplish, he would begin with, ‘In the name of the Holy Trinity, I will do this or look to that.’”

Columbus yearned for the evangelization of the natives because he saw the humanity in them.

“They should be good and intelligent servants,” he wrote, “for I see that they say very quickly everything that is said to them; and I believe that they would become Christians very easily, for it seemed to me that they had no religion. Our Lord pleasing, at the time of my departure I will take six of them from here to Your Highnesses in order that they may learn to speak.”

The modern concept of separating church and state didn’t enter into Columbus’s thinking, but that is more a reflection of his time than his character.

His sovereigns were Christian princes; to extend their nation’s borders was to extend Christianity. To conquer new lands was to spread the gospel. He was fulfilling a divine destiny for himself, the kingdom, and for the Church.

Recent polls show that a majority of Americans support celebrating Columbus and his role in the nation’s history. Last year, however, the Los Angeles City Council voted to rename the holiday “Indigenous Peoples’ Day.”

More than 30 U.S. towns and cities, including San Francisco, Berkeley, Santa Cruz, Seattle, and Minneapolis, as well as the states of South Dakota, Hawaii, Alaska, and Oregon have done the same.

Columbus is on a growing list of targeted historical figures, with calls to eliminate or rename Columbus Day, remove his statues, and halt any celebration of his life.

The anti-Columbus campaign prompted a civic organization, the National Christopher Columbus Association, to create a new website last year, TruthAboutColumbus.com. The organization said in a statement that the site was designed to “expose the Marxist roots of today’s anti-Columbus movement and draw attention to the long history of bigotry behind the rhetoric, including anti-Spanish and anti-Catholic language still used today.”

The “Marxist roots?” Well, maybe. The campaign against Columbus isn’t truly about history. Ultimately, it isn’t even about Columbus. The case against him is actually part of a larger campaign to undermine Western values and Western heroes and to shift the power balance of the nation.

Making Americans distrust their own history and their heroes have long been a focus of communist disinformation.

My friend and frequent collaborator, Ion Mihai Pacepa, spent much of his life trying to sow that type of doubt on behalf of the Kremlin (until they pushed him too far and he became the highest-ranking officer ever to defect from the Soviet bloc). The Soviet Union devoted massive resources to raising questions about Western icons, and Russia seems to be continuing right where the USSR left off.

Writing last year in National Review, Jennifer C. Braceras explained: “Not surprisingly, revisionist accounts of Columbus as evil were common in Soviet textbooks in the 1970s and ’80s. And modern-day Marxists still view Columbus a man driven by a ‘lust for profit’ and condemn the holiday that bears his name as a celebration of ‘the violent and bloody accumulation of capital for the ruling classes.’”

That type of thinking, of course, has spread beyond Russian borders.

Braceras concluded that “in a world where slavery and barbarism were commonplace,” Columbus’s goal “remained trade and evangelization of the natives, not conquest or elimination,” and “he punished (even executed) those who abused natives against his express orders.”

In other words, early-20th-century Americans basically got it right. His life is worth celebrating and his legacy worth remembering.

So, aware that the man wasn’t perfect, but also in recognition of his bravery, the importance of his discovery, and the contributions of those Americans who themselves were seen as outsiders before Columbus was so honored, I wish you all a very Happy Columbus Day.