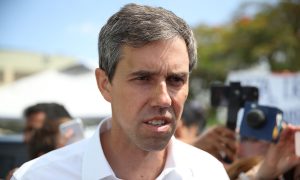 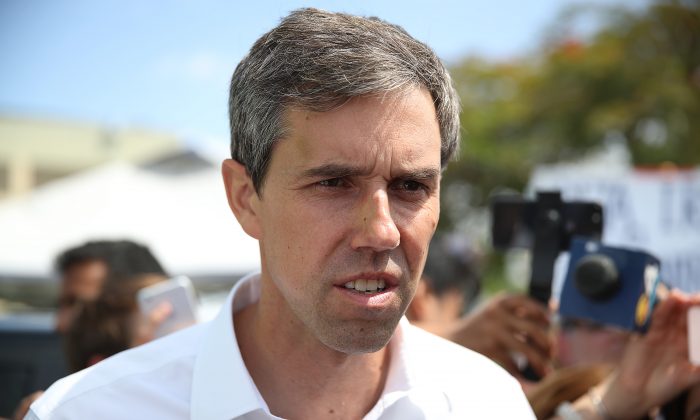 Democratic presidential candidate former Rep. Beto O’Rourke speaks to the media as he visits the outside of a detention center for migrant children in Homestead, Fla., on Jun. 27, 2019. (Joe Raedle/Getty Images)
Politics

A survivor of the Columbine mass shooting said that “biased” reporters weren’t interested in hearing why he opposes Beto O’Rourke’s proposed gun ban.

Evan Todd, who was shot during the Columbine massacre in 1999, asked O’Rourke at an event in Colorado last week how far the gun ban would go and was not pleased with the answer.

“I understand that you want to get a mandatory buyback for ARs and AK-47s. None of my classmates were murdered with those weapons. Fifty percent of mass murders don’t happen with those weapons. Don’t you think it’s time we get rid of all semi-auto firearms?”

O’Rourke responded in part: “I would love to have your help. If you want to sit down and talk to about the kind of weapons that are going to be important to be regulated, I’m here with you and want to listen to you.”

O’Rourke later added that people have “no reason” to have some types of gun “to hunt deer” or “in their homes.”

I wanted a clear answer from Beto of where he draws the line, but never got one. To answer my own question on if we should ban guns, the answer is: HELL NO! As far as my stance on guns? The Second Amendment supports me. https://t.co/2W0fPzn0aD

Todd was understood by some media as being a supporter of the proposed gun ban, prompting him to take to Twitter to clarify: “I wanted a clear answer from Beto of where he draws the line, but never got one. To answer my own question on if we should ban guns, the answer is: HELL NO! As far as my stance on guns? The Second Amendment supports me.”

Todd, director of communications for Bullets Both Ways, added during a Sept. 23 appearance on “Fox & Friends.” that he wanted to hear O’Rourke speak.

“And if I got the opportunity to ask him where he drew the line as far as his gun confiscation plans—and I wanted to phrase it in a way that allowed him to speak his mind and he did,” he said. “He really is open to… banning and confiscating nearly all firearms,” Todd said.

Initially, reporters were interested in speaking with him, Todd said. But after finding out about his political preferences, they stopped pursuing interviews.

“The media, by and large, is biased, and in some cases, complicit, with pushing the extremists’ far-left agenda,” Todd said. “There were many that were very interested in talking to me afterward. But, when they found out my true stance, they suddenly were less interested. So it’s been crickets since they found out where I truly stood on the issue.”

About the proposed ban, Todd added, “It’s insulting and dangerous. You’re removing the means of protection for millions and millions of law-abiding Americans. I think his ban is misplaced.”

Todd and another event attendee were reacting to O’Rourke recent pronouncement that if he were elected, his administration would take Americans’ guns.

“Hell yes! we’re gonna take your AR-15, your AK-47,” he said. “We’re not going to allow it to be used against our fellow Americans anymore.”