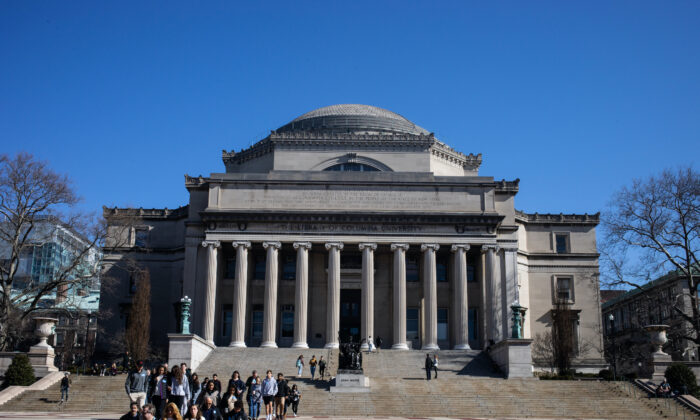 Internal emails of Dr. Anthony Fauci, recently obtained by U.S. media through the Freedom of Information Act (FOIA), have cast a spotlight on the longstanding relationship between an epidemiology professor at Columbia University and China.

Walter Ian Lipkin, a Columbia professor known as a “virus hunter” for his long career in studying infectious diseases, wrote to Fauci, the director of the National Institute of Allergy and Infectious Diseases, in May 2020 and appears to thank the official for publicly rejecting the possibility that the virus leaked from a lab.

“We deeply appreciate your efforts in steering and messaging,” Lipkin wrote on May 5, 2020.

A day earlier, Fauci told National Geographic that the evidence “strongly indicates” the CCP virus “evolved in nature and then jumped species,” and he dismissed the lab-leak theory.

It’s unclear who else the “we” in the message is referring to. But as part of the email, Lipkin also forwards a May 5 email from CCP official Chen Zhu to the professor.

Chen is currently the vice chairperson of the Standing Committee of the National People’s Congress, the regime’s rubber-stamp legislature. He previously served as China’s minister of health from 2007 to 2013, and a member of the Chinese People’s Political Consultative Conference, a political advisory body, from 2005 to 2013.

The entirety of Chen’s message to Lipkin has been redacted under FOIA.

Lipkin went to China at the onset of the COVID-19 pandemic to assist Beijing in its combat against local outbreaks.

Upon his return to the United States, Lipkin became vocal in denouncing the possibility that the CCP virus originated from a laboratory leak at China’s Wuhan Institute of Virology (WIV).

“All the evidence that we’ve seen thus far indicates that this virus came from wildlife,” Lipton told China’s state-run broadcaster CCTV in February 2020. “And there is no evidence that there was any conspiracy or sloppiness or anything that led to anything coming out of the Institute for Virology in Wuhan.”

A month later, Lipkin and a group of international scientists further dismissed the lab leak theory in their findings published in the journal Nature Medicine. They concluded: “It is improbable that SARS-CoV-2 emerged through laboratory manipulation of a related SARS-CoV-like coronavirus.”

The lab leak theory, dismissed as a “conspiracy theory” at the start of the pandemic, has garnered international scrutiny in recent months as new evidence has emerged, including how WIV staff became sick with COVID-19-like symptoms before the outbreak.

Lipkin’s close working relationship with China appears to date back at least to the SARS outbreak of 2003. He went to China as a SARS adviser to China’s Ministry of Science and Technology and Ministry of Health, while acting as an intermediary between the World Health Organization and Chinese authorities.

He worked closely with Chen, who at the time was vice president of the state-run Chinese Academy of Sciences (CAS).

After SARS, several Chinese biomedicine institutions were established with contributions from Lipkin, including Guangzhou Institutes of Biomedicine and Health, CAS’s Institut Pasteur of Shanghai, and the Center of Infectious Diseases at the Peking University Health Science Center.

Lipkin has been CII’s director since 2007, according to his LinkedIn page.

In October 2015, Lipkin visited the WIV to present a report at an event presided by Shi Zhengli. Shi, the director of the WIV’s research center who has earned the nickname “Bat Lady” for her research on bat coronaviruses, has flatly rejected the lab leak theory.

In 2019, the CAS awarded funding for a joint project between CII and China’s Sun Yat-Sen University—the latter having been identified as having ties to the Chinese military. The project was for researching zoonotic diseases, that is, infectious diseases that transmit from animals to humans.

Weeks before his January 2020 trip to China to assist Chinese authorities to combat the spread of the virus, Lipkin visited the Chinese Consulate in New York and was awarded a medal by Consul General Huang Ping.

The medal—issued jointly by the CCP’s Central Committee, the cabinet-like State Council, and the regime’s highest military body Central Military Commission—was used to commemorate the 70th anniversary of the Party taking power in China. To qualify for the medal, foreigners must have “made outstanding contributions” to the founding of the Chinese regime, according to China’s state-run media.

Years earlier, the Chinese Consulate in New York had nominated Lipkin for China’s highest honor to foreign scientists, the International Science and Technology Cooperation Award, according to the regime’s Ministry of Science and Technology. Lipkin received the award in January 2016 in a ceremony presided by top CCP officials, including Chinese leader Xi Jinping and Premier Li Keqiang—as well as Chen.

Two months later, in March 2016, Lipton took part in a banquet hosted by the Chinese Consulate in New York honoring scientists who made significant contributions to Sino–U.S. cooperation on science and technology.

Lipkin and Fauci’s office didn’t respond to requests for comment.