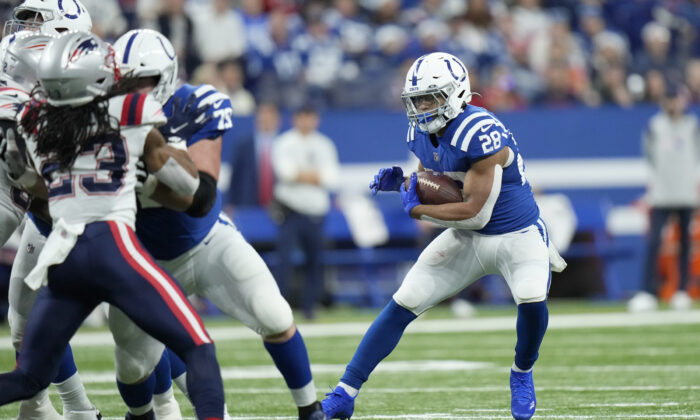 Indianapolis Colts running back Jonathan Taylor (28) runs with the ball during the first half of an NFL football game against the New England Patriots in Indianapolis, on Dec. 18, 2021. (AJ Mast/AP Photo)
NFL

The Indianapolis Colts shut out the visiting New England Patriots for three quarters in an extremely intense, physical effort resulting in a 27–17 victory, as the Pats came up short in their comeback attempt in the fourth quarter.

The Patriots had won seven straight to lead the AFC East Division, in hopes of getting the top seed in the AFC for home-field play-off advantage; the loss drops them to 9–5.

The Colts had also shut out the Vikings in the second half of their last game, shutting out two teams for five consecutive quarters. The win brings the Colts into contention for a wildcard play-off with a record of 8–6, after having started winless in their first three games.

Colts RB Jonathan Taylor overwhelmed the Patriots for 170 yards, including a 67-yard touchdown late in the game to seal the victory. They have won each game that Taylor gains 100-plus yards, and have now won five of their last six games. The win also snapped an eight-game losing skid against the Patriots since 2009.

“It was really just accepting the challenge, knowing it was going to be a dogfight, knowing everything had to be earned,” Taylor said. “When you do that, that’s winning half the battle.”

The Colts’ running game left their QB, Carson Wentz, with just 5-of-12 passing for 57 yards, one touchdown, and one interception.

Nyheim Hines scored the opening touchdown for the Colts on a trick play. Taylor received a direct snap from center, handed the ball to Wentz, who flipped a forward pitch to Hines for a 8-yard touchdown run with 3:53 remaining in the first quarter.

The Colts’ intensity carried over to the special teams as E.J. Speed recovered a blocked punt by teammate Matthew Adams in the end zone for their second touchdown at the end of the first quarter. Speed also scored on a blocked put in a 23–17 win over the Jacksonville Jaguars in mid-November.

“It seems like they just had good force on the play,” New England special teams star Matthew Slater said. “That’s tough when you give up plays like that, it’s going to be hard to win. We spotted a team 20 points at their place. Good luck trying to win. There’s no excuse to play like that.”

Colts’ Michael Badgley would kick a 25-yard field goal to increase the lead to 17–0 with 4:31 left in the second quarter; he would kick another FG early in the third quarter to make it 20–0.

The Colts defense was led by LB Darius Leonard who made 10 tackles, eight solo, an interception, and forced a fumble.

For the Patriots, Mac Jones completed 26 of 45 passes for 299 yards, after throwing two interceptions by the first drive of the second half. The young QB settled in late in the third quarter as the Colts defense seemed to confuse him with different looks pre-snap, then switching their alignment just before the play. Jones was able to throw two touchdowns in the attempted comeback.

Jones’s favorite target was Hunter Henry, who had six receptions for 77 yards and two touchdowns. Jones threw a 12-yard TD pass to Henry at the beginning of the fourth quarter.

Nick Folk kicked a 25-yard field goal with 8:57 remaining, following an interception by Devin McCourty to get within 10 points, 20–10.

The Patriots would come within three, 20–17, when Hunter Henry caught a 7-yard touchdown pass with 2:21 remaining.

The Patriots had to regain possession as the Colts began a potential game-ending drive with two minutes left. On a 2nd & 8, the Pats lined up the defense to stop the run. That’s when Colts’ RB Taylor started his run left and cut up through a gap that saw two defensive backs; he was able to break through that defensive front for the 67-yard touchdown run locking up the win 27–17. It was his 19th total touchdown of the year and one shy of the franchise record.

The Colts next have the Saturday night game at Arizona, while the Patriots are at home in a rematch against Buffalo.