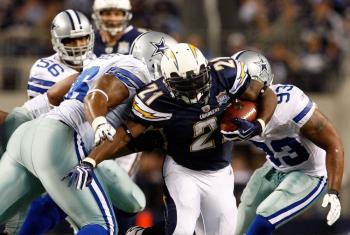 Colts and Saints Keep on Winning

Rahul Vaidyanath
Journalist
Rahul Vaidyanath is a journalist with The Epoch Times in Ottawa. His areas of expertise include the economy, financial markets, China, and national defence and security. He has worked for the Bank of Canada, Canada Mortgage and Housing Corp., and investment banks in Toronto, New York, and Los Angeles.
View profile
Follow
biggersmaller
Print
The Indianapolis Colts (13–0) and New Orleans Saints (13–0) jumped out to early leads and hung on to remain unbeaten, while the San Diego Chargers (10–3) downed the Dallas Cowboys (8–5) 20–17, to ensure that both teams live up to their December reputations.

“I’ve always learned never to take winning for granted,” said Colts quarterback Peyton Manning. “You sure do appreciate all the hard work that’s gone into those wins.”

Manning threw four touchdown passes but he also had three passes picked off and completed fewer than 50 percent of his passes.

“We’re a very close-knit group of guys who know how to fight in big games, particularly when one phase of the game is not working,” said head coach Jim Caldwell.

The question now becomes, for the Colts, who have wrapped up first place in the AFC and home field advantage throughout the playoffs, how much to rest the star players.

The Colts face the Jacksonville Jaguars (7–6) on Thursday night in Florida. With the short week and first place already wrapped up, you can expect Peyton Manning to see limited action.

In Atlanta, the Saints faced a team without starting QB Matt Ryan and running back Michael Turner. But division games are always tough and backup QB Chris Redman had a solid outing filling in.

For the Saints, Drew Brees had another stellar game, throwing three touchdown passes and passing for 296 yards. He also completed 31 of 40 passes.

The Saints have not yet clinched the NFC’s top seed, as the Minnesota Vikings (11–2) crushed the Cincinnati Bengals (9–4) and remained two games back with three games left in the regular season. The Saints have clinched a first round bye in the playoffs, however.

The Saints will host the Dallas Cowboys on Saturday night. Although talk of going unbeaten in the regular season dogs coach Sean Payton, he responded, “We’re looking at the next goal. The next objective is to play against a good Dallas team. We’re not getting past that.”

Chargers and Cowboys in December

San Diego came up with a key goal line stand to stuff Marion Barber and the Dallas Cowboys. The Chargers stopped Barber three consecutive times from the 1-yard line and the Cowboys came away empty-handed.

With the win, San Diego has now won 16 consecutive December games while Dallas's struggles continue in the last month of the year. Dallas is now 1–6 in their last seven games in December.

Dallas failed to make the most of their red zone opportunities. They only converted on one of eight third downs and kicker Nick Folk missed a 42-yard field goal.

“We need to do the little things better to get over the hump,” said QB Tony Romo in an interview for NBC’s Football Night in America.

The December trend continues for both teams.

Vikings Back on Track

Brett Favre and company put last week’s poor performance in the rearview mirror and hammered the Cincinnati Bengals 30–10. Adrian Peterson, who rushed for only 19 yards against Arizona last Sunday night, ran for 97 yards and two touchdowns against Cincinnati.