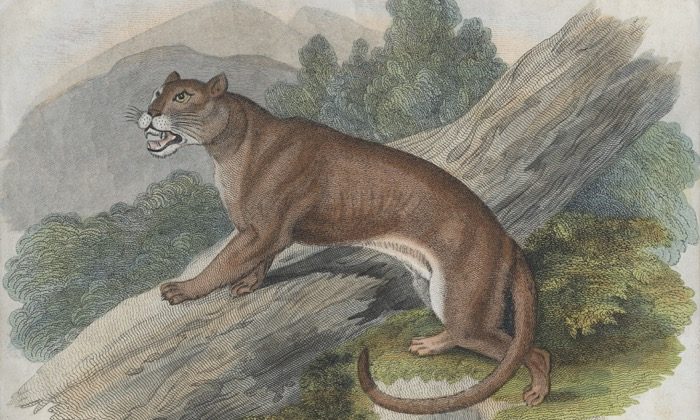 A cougar or puma of the Americas, circa 1850. (Hulton Archive/Getty Images)
US News

A man in Colorado was convicted for the illegal trade of big game wildlife and the illegal possession of a mountain lion—a Class Six Felony—on Nov. 8.

For years, Andrew Pashley, 35, had not only illegally hunted wildlife, but had also organized illegal hunts in the state of Colorado.

Various reports of illegal hunting and outfitting led to Pashley’s conviction, according to the Colorado Parks & Wildlife (CPW) news release. In 2017, CPW Wildlife Officer Joe Nicholson’s suspicions were aroused when a hunter’s mountain lion was inspected by CPW during a mandatory inspection, which is required within five days of harvest.

The Hunted Lead to the Hunters

After teaming up with wildlife Officer Scott Murdoch, the duo located the site where the mountain lion was killed and interviewed the hunter. Nicholson’s suspicions were confirmed when the hunter was caught lying about the details of the mountain lion hunt and his ties with Pashley, states the news release.

As the investigation continued in Feb. 2017, a search warrant was issued on Pashley’s home where multiple evidence of illegal outfitting activities were found along with illegally possessed wildlife.

The wildlife officers’ efforts proved fruitful: it was found that “Pashley knowingly and unlawfully accepted $3,000 cash from another Colorado man in exchange for providing unregistered illegal outfitting services,” according to the press release.

In an interview with The Epoch Times, the Northeast Region’s Public Information Officer (PIO) Jason Clay, said that “the hunter who had payed Mr. Pashley for the illegal outfitting services pled guilty to hunting on private property without permission, illegal possession of a mountain lion, and illegal method of hunting.”

The hunter, who was only convicted of misdemeanor charges, was sentenced to one-year supervisory probation. During that time, he is suspended from hunting, trapping, and fishing. This does not include the possible addition of another suspension following a future CPW hearing.

Part of the hunter’s plea agreement was to testify against Pashley on trial. Like the hunter, Pashley was sentenced to supervisory probation—but Pashley received one additional year and even faces the possibility of a lifetime suspension from hunting, trapping, and fishing privileges in Colorado.

Pashley is also restricted from possessing guns. He was ordered to forfeit his truck—which was used in the illegal outfitting business—along with the hunting equipment he owned for his hounds.

From 2016 to 2017, 450 mountain lions were legally harvested in Colorado, according to the lion harvest sheet provided by the CPW.

CPW’s Statewide PIO, Travis Duncan said, “Legal hunting is an effective tool that wildlife managers use to balance wildlife with their ecosystems and ensure healthy populations” in an email to The Epoch Times.

But Duncan says cases like Pashley’s do a disservice to this effective tool used to balance the ecosystem.

In 2015, James Hirschboeck, 53, was also charged for running an unlicensed outfitting business where he would charge $3,000 for each illegal deer and elk hunt—13 counts total, according another news release by CPW. Hirschboeck was additionally charged with counts of unlawfully taking and possessing a 5×6 bull elk, hunting on private property without permission, providing an illegal hunt for big game wildlife for profit, and menacing with a deadly weapon.

Clay said that these cases put a black-eye on the legal and ethical sportsmen and sportswomen of the city; these are crimes that wildlife officers are always working against.

“Poaching undermines that tool and is a crime against everyone in the state of Colorado and their visitors. If you see a poaching incident, report it. Call 1-877-265-6648 (1-877-COLO-OGT) or email game.thief@state.co.us,” Duncan stated.

Miguel Moreno
Reporter
Follow
Miguel Moreno is a reporter based in New York City who works for the Epoch Media Group. His main area of focus is breaking news and politics.
Miguel_NTD