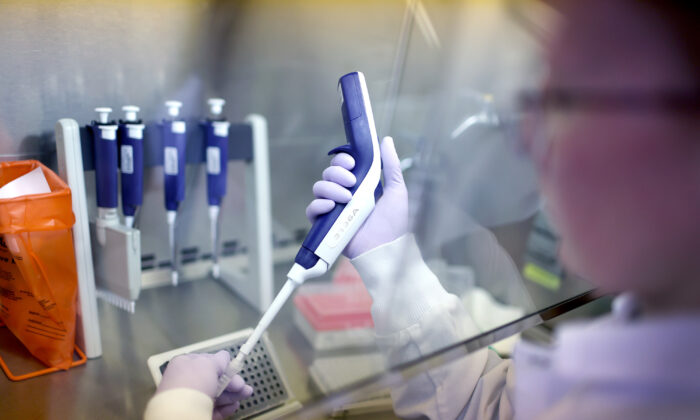 Microbiologist Anne Vandenburg-Carroll tests poultry samples collected from a farm located in a control area for the presence of avian influenza, or bird flu, at the Wisconsin Veterinary Diagnostic Laboratory at the University of Wisconsin-Madison, on March 24, 2022. (Scott Olson/Getty Images)
Regional News

An inmate at a state correctional facility in Delta County, Colorado, has tested positive for avian flu, also known as H5N1 flu, the Colorado Department of Public Health announced on April 28.

The unnamed man, 40, tested positive for the flu earlier this week following a nasal swab test and the result was confirmed by the Centers for Disease Control and Prevention (CDC) on Thursday.

Repeat testing on the person was negative for influenza, officials said.

According to the department of public health, the man, who is largely asymptomatic and has only reported fatigue, tested positive after being in close contact with infected poultry. Officials noted that the virus may have been present in his nose without causing infection.

He was working in a pre-release program at a commercial poultry farm in Montrose County before testing positive, Public health officials said.

The individual is now isolating and receiving the influenza antiviral drug oseltamivir (tamiflu), which has been approved by the FDA for treatment of acute uncomplicated influenza and is recommended by the CDC.

It makes the first known confirmed case in the United States from the current outbreak of the virus and only the second known infection worldwide of this particular strain after an individual in the United Kingdom tested positive for it in January.

The UK’s Health Security Agency said at the time that the individual was asymptomatic and was self-isolating.

Officials, citing scientific research, said that the risk of catching the Highly Pathogenic Avian Influenza (HPAI) is low as avian viruses spread among wild birds and poultry and so do not typically infect humans, nor do they spread from person to person.

“We want to reassure Coloradans that the risk to them is low,” said Dr. Rachel Herlihy, state epidemiologist, Colorado Department of Public Health and Environment. “I am grateful for the seamless collaboration between CDC, Department of Corrections, Department of Agriculture, and CDPHE, as we continue to monitor this virus and protect all Coloradans.”

HPAI mainly affects birds, although it has been discovered in a variety of other animals including pigs in China, Indonesia, and Vietnam, dogs in Thailand, and domestic cats in Germany, according to the Centers for Disease Control and Prevention (CDC).

In domestic poultry, it can prove particularly deadly.

So far, the outbreak of HPAI has spread to more than 30 states, from Pennsylvania to Utah.

Colorado health officials said on Thursday that the infected chicken flock has been”euthanized and disposed of” while those who responded to the outbreak, as well as other inmate workers working on the farm, were given personal protective equipment.

The latest incident of a human case of avian flu comes after a 4-year-old boy in China’s central Henan province tested positive for the H3N8 strain of bird flu.

China’s National Health Commission said in a statement that the boy had been in close contact with chickens and wild ducks and developed a fever and other symptoms on April 5. He was admitted to a hospital on April 10.

Officials said they carried out medical assessments of individuals who had been in close contact with the child and no abnormalities were found.