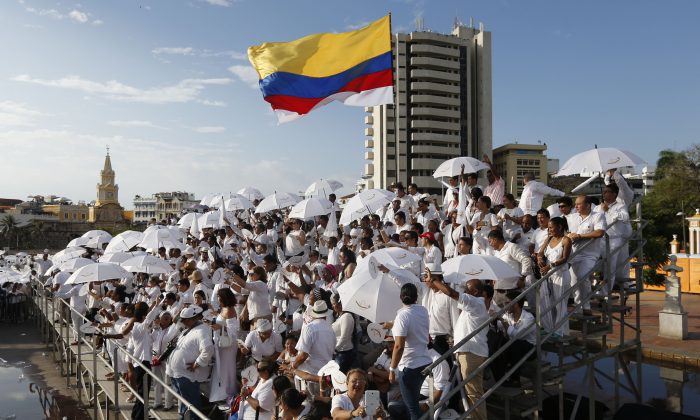 People wait for the start of the peace ceremony prior the signing of a peace agreement between Colombia’s government and the Revolutionary Armed Forces of Colombia, FARC, in Cartagena, Colombia, on Sept. 26. (AP Photo/Fernando Vergara)
International

BOGOTA—A member of a U.N. team working on a project in Colombia to substitute illegal crops with legal ones was kidnapped by dissident former FARC rebels who have rejected the peace process, the United Nations and the government said on Thursday.

U.N. official Arley Lopez, a Colombian, was seized on Wednesday by gunmen close to Miraflores in southern Guaviare province, where coca cultivation has long formed a big part of Colombia’s cocaine production. He was stopped by armed men in a convoy of vehicles.

The government is seeking to switch coca—the raw material for cocaine – to legal crops.

The kidnapping came as representatives of the U.N. Security Council was in Colombia to discuss the peace accord signed late last year with the Revolutionary Armed Forces of Colombia (FARC) to end more than five decades of conflict in the Andean nation.

The United Nations “condemns the events that happened yesterday in Guaviare and that go against the integrity and rights of a colleague in the United Nations Office on Drugs and Crime and demand his immediate liberation,” the world body said in a statement.

The government also condemned the kidnapping, which it characterized as “regrettable.”

While as many as 7,000 fighters agreed to the pact and are in the process of turning in their weapons to the United Nations, several hundred have refused. Those dissidents have formed a new criminal band and continue the lucrative drug trafficking business that the official FARC group engaged in for years, the military has said. FARC’s leadership has expelled the dissidents, after decades of using drug trafficking, kidnapping and extortion to fund its battle with the government.

Many Colombians, including opposition politicians like former President Alvaro Uribe, are angry the peace accord allows former FARC fighters to avoid jail time and enter politics. They say the government has not done enough to stop other criminal groups and FARC dissidents filling the void and taking over the drugs business.