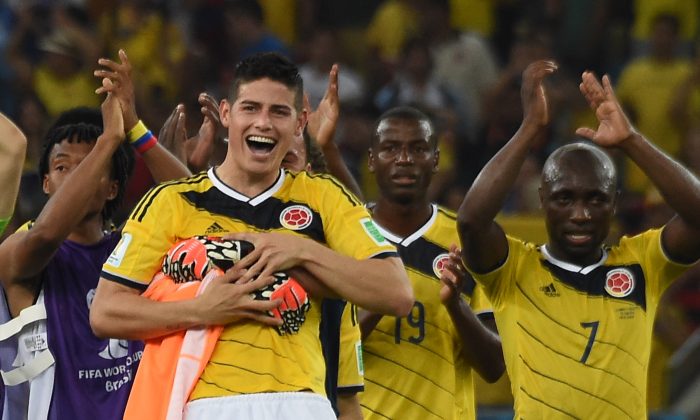 Colombia's midfielder James Rodriguez and his teammates celebrate after the Round of 16 football match between Colombia and Uruguay at the Maracana Stadium in Rio de Janeiro during the 2014 FIFA World Cup in Brazil on June 28, 2014. (LUIS ACOSTA/AFP/Getty Images)
Soccer

Colombia and Brazil will clash in the first World Cup 2014 quarter final match on Friday, July 4.

Hosts Brazil will likely be the favorites to go through, but their performances in the World Cup have not been inspirational to say the least. A Seleção has been far too reliant on Neymar to deliver the goods, and when he fails to pull goals out of a hat like in Brazil’s second round clash with Chile, things can get ugly quickly.

Colombia, on the other hand, are the in-form team at the moment, and look more like a team than Brazil. Against Uruguay, Colombia impressed with some lovely build-up play and passing moves. Although both Colombia goals were scored by James Rodriguez, who is arguably the best player of the tournament so far, Los Cafeteros look by far the better overall team than Brazil.

If either side wishes to qualify for the semi finals, other players need to step up and score goals. For Brazil, Hulk and Fred have to start making things happen and put away the chances, because Neymar is likely to get marked more and more tightly as Brazil progresses through the tournament. Hulk did show that he can produce the goods against Chile (a number of good movements in the box and one goal disallowed for handball), and will have to start translating his good plays into goals.

For Chile, its simple: Juan Guillermo Cuadrado and Jackson Martínez need to start scoring goals. Cuadrado has been an excellent right forward so far in the tournament, notching 3 assists and 1 goal against Japan, and needs to find the net more often. Ditto Martinez, who has been billed as a Radamel Falcao-type player.

Here is how Colombia and Brazil might line up for the match:

Prediction: Neymar may be Brazil’s golden boy, but James Rodriguez has a better team around him. 2-1 to Los Cafeteros.

See an AP round up of Saturday’s round of 16 matches.

Brazil Squeaks Past Chile, Next Up is Colombia

RIO DE JANEIRO (AP) — Neymar pointed his right index finger in the air and then formed the shape of a heart with his thumbs and fingers loftily raised above his head.

The 22-year-old striker had just slotted the winning penalty as Brazil beat Chile 3-2 in a dramatic shootout after the score was locked 1-1 at the end of extra time, setting the World Cup hosts on course for a showdown against a James Rodriguez-inspired Colombia lineup that beat Uruguay 2-0 later Saturday to reach the quarterfinals for the first time.

As Chile’s last penalty hit the post, it seemed as though the population of Brazil breathed a collective sigh of relief that its beloved team was still in the World Cup.

While it was a heart-stopper for Brazil, which has spent billions to host football’s marquee tournament, it was a heartbreaker for Chile, which created plenty of chances to force an upset win — none closer than Mauricio Pinilla’s powerful shot into the crossbar in the last moments of extra time.

David Luiz for Brazil and Alexis Sanchez for Chile scored first half goals.

Shops were closed and usually busy roads were quiet as the country of almost 200 million urged its revered Selecao to victory and ever closer to a sixth World Cup title — a trophy they desperately want to collect on home soil.

“There are only three steps left and I still want to be back here to give another interview, with Brazil partying,” Brazil goalkeeper Julio Cesar said after his player-of-the-match performance, including two crucial saves at the start of the shootout that ensured some redemption for a costly error in South Africa four years ago.

First things first. Brazil next faces a Colombia team that has won all four of its matches so and is being led by the increasingly confident playmaker Rodriguez, who scored once in each half against Uruguay — which was missing its star striker Luis Suarez — to lift his tournament tally to five goals.

Suarez was banished from the World Cup for biting Italy defender Giorgio Chiellini in the 1-0 group-stage win that secured Uruguay’s place in the knockout rounds.

Diego Forlan started in place of Suarez — who claimed he accidently made contact with Chiellini’s shoulder and has appealed against his ban of four months from football and nine international matches — but couldn’t reproduce anything like the form that earned him the 2010 World Cup player of the tournament award.

Two early contenders for that accolade in 2014 underlined their importance to their teams and set up an intriguing showdown at Fortaleza on Friday. Baby-faced Rodriguez has played with maturity beyond his 22 years to fill the void left by injured striker Radamel Falcao, not just creating opportunities but also converting them for Colombia.

He deftly controlled a cross with his chest and volleyed in from long range to score the opener and put the Uruguayans back on their heels, but said “I think now the toughest is coming up.”

Neymar is trying to live up to the hype in Brazil, coming through in the big moments. He scored four goals in the group stage and, although he wasn’t at his best against Chile, he found the net after his stuttering run-up to the penalty spot during the shootout. His kick gave Brazil a 3-2 buffer, proving decisive when Gonzalo Jara’s final attempt for Chile hit the post, sparking raucous celebrations on the field and in the yellow-washed crowd in Belo Horizonte.

It was just one of the moments that Chile coach Jorge Sampaoli didn’t see coming, and he later reflected on Pinilla’s late strike that could have changed the complexion of the tournament.

“The near goal has been very hard for us to take,” he said. “If it had gone in, it would have been a historic moment for Chile.”

The packed fan fests in Rio’s Copacabana beach and at Sao Paulo were packed with screaming, flag-waving Brazilians. At the Maracana, Brazil fans already inside the stadium for the Colombia-Uruguay match erupted into cheers as they followed the win on TVs. The Maracana was also a sea of yellow, but this time it was tens of thousands of Colombian fans.

“Congratulations to all the Colombian people,” coach Jose Pekerman said. “The people in Colombia deserve this.”