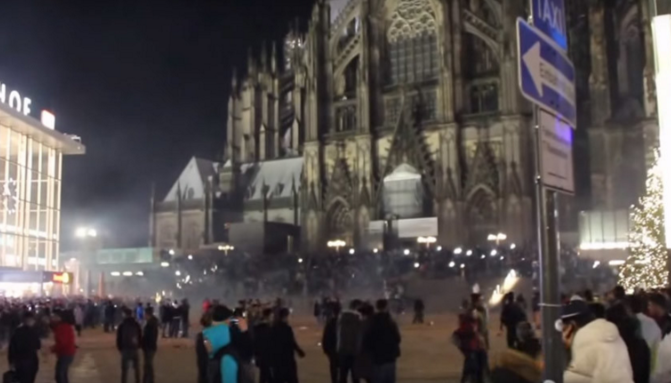 Dozens of women were sexually assaulted on New Year’s Eve by a group of hundreds of men who were of Arab or North African origin, authorities said.

“There was a very large number of sexual assaults there–and in a massive way. Women were grabbed and attacked,” said Wolfgang Albers, Chief of Police in the Rhineland city, at a press conference on Monday.

“The crimes were committed by a group of people who from appearance were largely from the north African or Arab world.”

One of the victims, named only as Katja L, told Der Express about her ordeal with the crowd of men who grabbed her buttocks and breasts.

“I was groped everywhere. It was a nightmare. Although we shouted and beat them, the guys did not stop. I was desperate and think I was touched around 100 times in the 200 meters,” she said. “Fortunately I wore a jacket and trousers. A skirt would probably have been torn away from me.”

One woman was even raped, Albers added.

But officials insisted that many of the men have been known to them and are not newly arrived refugees.

Over 100 police officers went through the crowd trying to catch the men, but because of the darkness were far from successful, Albers said, reported The Local.

Some accused national media of not covering the situation due to the ethnicity of those involved. And the situation has prompted some to call for a reduction in refugees in the country.

MP Steffan Bilger from Angela Merkel’s Christian Democratic Union has claimed the events in Cologne were proof Germany needed to reduce its intake of refugees.

“It can’t go on like this,” he said via Twitter. “Urgently needed: reduction of influx, secure borders, intensifying of deportations and meaningful justice.”

“Any refugees who have a problem integrating into our open society and respecting the rights of other people” must be dealt with using the “full force of the law,” Plickert told German press agency DPA.

Others, though, said people should hold off until the investigation is finished.