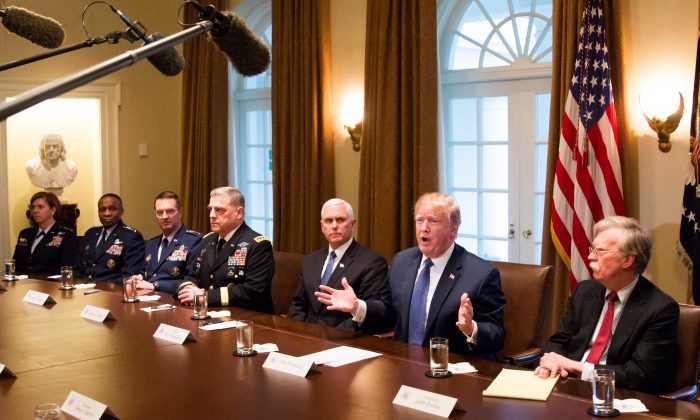 As the United States prepared on April 11 to respond to a suspected chemical attack by the Russia-backed regime in Syria, President Donald Trump lamented the decline in relations with Moscow to below Cold War levels and blamed the predicament on the Russia-collusion investigation.

“Much of the bad blood with Russia is caused by the Fake & Corrupt Russia Investigation, headed up by the all Democrat loyalists, or people that worked for Obama,” Trump wrote on Twitter. “No Collusion, so they go crazy!”

The president’s comment came shortly after he warned Russia that the United States will be attacking Bashar al-Assad’s regime. Trump’s warning was in response to an earlier threat by Russia to shoot down any missiles America launches into Syria.

The presence of Russian forces in Syria has long complicated American efforts there, but the latest remarks have brought the two world powers to the brink of armed conflict at a time when relations between Washington and Moscow are in decline on several fronts.

At this crucial juncture, Trump would do well with a full range of diplomatic options, but his message appears to suggest that the Russia-collusion investigation is limiting what he can do and puts the global order in peril.

“Our relationship with Russia is worse now than it has ever been, and that includes the Cold War. There is no reason for this,” Trump tweeted on April 11. “Russia needs us to help with their economy, something that would be very easy to do, and we need all nations to work together.”

Our relationship with Russia is worse now than it has ever been, and that includes the Cold War. There is no reason for this. Russia needs us to help with their economy, something that would be very easy to do, and we need all nations to work together. Stop the arms race?

Trump took aim specifically at special counsel Robert Mueller, who is leading the investigation into whether the Trump campaign colluded with Russia to influence the 2016 election, saying that “Mueller is most conflicted of all.” Trump also pointed out that Mueller’s team is staffed entirely with Democrats and people who worked for President Barack Obama.

Mueller’s investigation is approaching its anniversary, but has not produced a single indictment supporting the collusion allegations. That investigation is one of several launched since the 2016 election. None have found evidence of collusion.

Mueller has instead indicted people for crimes unrelated to the campaign. In an unprecedented move on April 9, the FBI raided the offices of Trump’s personal lawyer in search of evidence far removed from the Russia-collusion allegations. Trump called the raid “an attack on our country.”

Last month, the United States expelled dozens of Russian intelligence officers in a coordinated response with European allies to the poisoning of a former Russian spy in the United Kingdom. On April 6, the U.S. Treasury Department sanctioned several of Russia’s top billionaires and government officials. The Russian stock market crashed as a result.

In Syria, Trump vowed there would be a swift response to the chemical attack in Douma that killed 43 people and sickened more than 500. The United States and Russia back opposing sides in Syria’s seven-year-long civil war. Should Russians act to stop American missiles, the intercept would mark the first instance of direct conflict between the two nations in Syria.

“Russia vows to shoot down any and all missiles fired at Syria. Get ready Russia, because they will be coming, nice and new and ‘smart!'” Trump wrote on Twitter. Referring to Moscow’s alliance with Assad, he wrote, “You shouldn’t be partners with a Gas Killing Animal who kills his people and enjoys it!”

Russia vows to shoot down any and all missiles fired at Syria. Get ready Russia, because they will be coming, nice and new and “smart!” You shouldn’t be partners with a Gas Killing Animal who kills his people and enjoys it!

In response, Russia’s Foreign Ministry said, “Smart missiles should fly towards terrorists, not towards the lawful government.”

Foreign Ministry spokeswoman Maria Zakharova said any U.S. missile salvo could be an attempt to destroy evidence of the reported gas attack in the Syrian town of Douma, for which Damascus and Moscow have denied any responsibility.

Asked if he had seen enough evidence to blame Assad, Mattis said, “We’re still working on this.”

He did not elaborate but added that the U.S. military stood ready to provide military options, if appropriate. It was unclear whether his remarks reflected any unease about Trump’s apparent move toward military action.

In Moscow, the head of a Russian parliamentary defense committee, Vladimir Shamanov, said Russia was in direct contact with the U.S. Joint Chiefs of Staff about the situation.

The Russian military said it had observed the movement of U.S. naval forces in the Gulf. Any U.S. strike would probably involve the Navy, given the risk to aircraft from Russian and Syrian air defenses. A U.S. guided-missile destroyer, the USS Donald Cook, is in the Mediterranean.

The Syrian foreign ministry accused the United States, which has supported some rebel groups in Syria’s conflict, of using “fabrications and lies” as an excuse to hit its territory.

In London, British Prime Minister Theresa May said all the indications pointed to Syrian government responsibility for the Douma attack and such “a shocking and barbaric act” could not go unchallenged.

“We’re rapidly reaching an understanding of what happened on the ground,” she told reporters. “We’ll be working with our closest allies to consider how we can ensure that those responsible are held to account.”