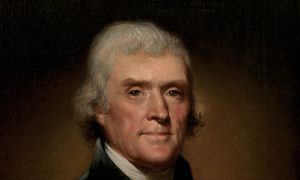 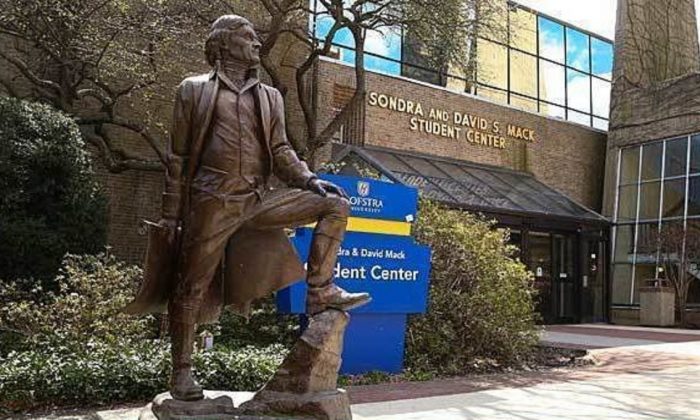 Students at a New York college said that a statue of Founding Father Thomas Jefferson should be removed from campus.

According to a media advisory obtained by the conservative blog Campus Reform, the activists gathered to “expose the culture of bias and discrimination,” and demand the state be removed.

“[Jefferson Has Gotta Go!] isn’t just about a statue,” Miranda Pino, a former board member of the Hofstra College Democrats, told Campus Reform. “Yes, the removal of the statue is important, but it is about what the statue represents: a legacy of racism and bigotry on college campuses.”

The Hofstra College Democrats “want the statue to be removed and [we] stand with the Jefferson Has Gotta Go Campaign,” added Brynne Levine, the group’s president.

The statue, if not removed entirely, should be moved into a museum to provide historical context to Jefferson’s actions, according to some students.

“Jefferson’s values aided in the construction of institutionalized racism and justified the subjugation of black people in the United States,” a student who identified himself as Ja’Loni Owens wrote in a petition in 2018. “Jefferson has been embraced as an icon by white supremacist and neo-nazi organizations such as the Ku Klux Klan and online white supremacist chat rooms.”

Owens, a Black Lives Matter activist and public affairs intern at Planned Parenthood once wrote that racism can cause post-traumatic stress disorder.

“Whiteness remains to be the biggest threat to our survival and continues to permeate every single facet of our lives, from the institutions we must navigate to interactions with our white counterparts. I am dealing with whiteness every time I leave the comfort of home,” he wrote in the essay.

“I’m in defense mode all the time and it’s exhausting. The result is extended periods of time where I am filled with nothing but rage, where it feels like I am always on the brink of crying, where I feel so vulnerable that I cannot handle seeing people who do not look like me, where even spending time with the white people that I call my friends induces racial anxiety.”

Hofstra College Republicans President Chris Kostulias previously told Campus Reform that the statue should stay after he launched a counter-petition.

“I believe the statue should stay because of the magnitude of Jefferson’s accomplishments. We all acknowledge he was a flawed in aspects, sadly a byproduct of his time,” he said.

According to the student newspaper, school leaders were confronted over the Jefferson statue in May 2018. Owens, told the leaders: “What do we have to do, or what do we have to say for students of color to finally be as valuable as our white counterparts?”

University President Stuart Rabinowitz said that every single student mattered to him.

After he said that, students turned around and held signs in the air that read, “Black Lives Matter! Does Hofstra agree?”

“Black Lives Matter was a reaction to the senseless killing of a number of young black people by police officers. That’s where Black Lives Matter comes from. I think it’s a bit of a stretch to say Black Lives Matter applies to the Jefferson statue. Secondly, of course black lives matter, and thirdly, this doesn’t add to the conversation,” Rabinowitz responded.

Hofstra officials didn’t respond to the latest protest over the statue but Rabinowitz wrote in a blog post later in May 2018 that the statue would remain where it is.

“On the one hand, Thomas Jefferson articulated the best of our ideals in the Declaration of Independence and was a defender of freedom in helping to create a new nation: the United States of America. That he was also a man of his time, unable to fully implement the bold vision articulated in the Declaration and the Bill of Rights, is, viewed through a contemporary lens, difficult to understand or forgive,” Rabinowitz wrote.

“Yet few of our founding fathers were able to live out the dream they had sketched out, which was the unprecedented vision of a free and equal world. Their words were, in many ways, far ahead of their time and certainly ahead of their actions.”

He added, “And still, today, the founding fathers represent the duality of the American character and the difficulty of our history: freedom and oppression, equality and injustice, in issues of race, gender, religion, and origin, that we have dealt with since our founding and will deal with for years to come. Yet in the documents most critical to our national character these men of their time laid out a vision of a world in which all people are created equal. It is this vision we celebrate and honor in our Founding Fathers, even as we wrestle with their human and indefensible failings.”

While the statue would remain in place, the university president said that he was convening a task force with other administrators and teachers “to consider further dialogue and education about our founding fathers, the Atlantic slave trade and Western expansion; to think about what freedom and equality mean at the University; and to consider how we use history to advance understanding and build a better, more just world.”