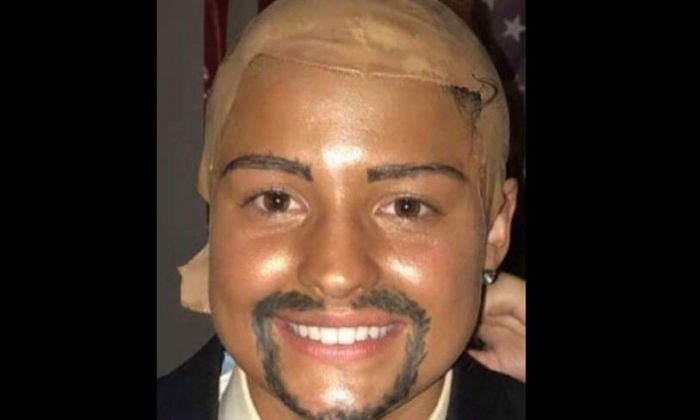 A photo of the student in question (Social Media)
US News

Authorities at a Massachusetts college are investigating claims made by students that a female soccer player attended a Halloween party with darkened skin to portray a character from the film “White Chicks.”

In a photo, the woman had “her skin darkened by makeup, a drawn-on goatee and a bald cap,” The Associated Press reported. Students say the player was portraying a character in “White Chicks” played by Terry Crews. In the movie, two black men disguise themselves as white women.

Wheaton College’s Black Student Association is demanding a “racial awareness training” across the campus, CBS News reported. A spokesman for the college said that the costume is “offensive and racist.”

Wheaton College will now forfeit its next soccer game against MIT in the NEWMAC tournament, CBS reported.

“The team recognizes this is the right decision and accepts the outcome,” Wheaton President Dennis Hanno told the media outlet. “This action is separate from, and will not replace, the student conduct hearing process involving specific individuals now underway. Rather, it is intended to signal a clear message that offensive and racist behavior will not be tolerated at Wheaton.”

At least 50 students gathered at Wheaton’s Mary Lyon Hall on Wednesday to complain to administrators about the costume.

“It’s crazy how people on this campus have been saying, ‘You’re overreacting,’ or ‘You’re being over-dramatic, it’s just a costume,’” Kiana Taylor, 21, told The Sun Chronicle.

“There are people in that room crying. Hurting. She should not be allowed to walk around campus right now. Why is she holding her head up high when we’re walking around like we did something wrong? As people of color we’re the ones left to deal with this.”

“After all that, she still painted her face and went outside and thought it was funny,” Candice Appiah, 18, added to The Sun Chronicle. “It was an act of arrogance and ignorance. As students of color, particularly black students, it shows us we’re not safe on campus.”

In the comments section of The Sun Chronicle and CBS, people were overwhelmingly stunned at by the school’s reaction to the student’s costume.

“Personally I’m more disappointed in the school punishing the entire girls soccer team than this girl choosing a costume of a movie character she thought was funny. Another liberal college pushing political correctness too far. I wonder if any African american students donned a Trump mask at any point over the last month. Would that be wrong too?” wrote one person.

Added another: “This is the most brilliant social experiment ever! This girl made a costume in blackface of a character of a a movie which is about black men portraying girls while in ‘white face.’ People were offended that the girl went blackface but didn’t see the black comedians going whiteface which was the premise of the movie as being offensive! The bottom line – the US has gone overly PC – it’s oke to make fun of white people in a movie but if you imitate the movie in costume, you are a racist. Guess what people…. the original movie is RACIST! Get over it people! Nobody Cried when the racist movie was in the theaters making millions!”

“OK, come March 17th, I don’t want anyone who isn’t Irish putting on any shamrocks, or green hats, or leprechaun costumes. Getting pretty sick of people culturally appropriating my Irish heritage, advancing the racist idea that we are drunks then using that stereotyping to get drunk themselves. No No No. Don’t do it,” said another.