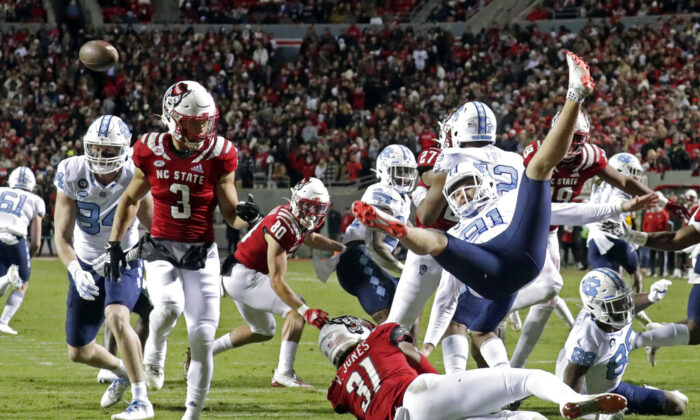 Enormous momentum shifts occurred throughout as the Wolfpack jumped out to a 14 point lead in the first quarter; the Tar Heels would counter with scoring the next 24 points before the Wolfpack could muster another touchdown, to pull within three points by the end of the third quarter (24–21).

With 1:35 remaining, Wolfpack QB, Devin Leary connected to a wide-open Emeka Emezie for a 64-yard touchdown pass along the sideline to bring them within two points, 30–28.

Several Tar Heels penalties ensued including offsides, roughing-the-passer, and a pass interference to set up another, 24-yard, TD strike from Leary to Emezie. The two-point conversion failed, and the Wolfpack had a final advantage of 34–30.

“I’ve never seen anything like it. I’ve got to do a better job,” Tar Heels coach Mack Brown said. “We’ve still got work to do, and that comes back to me.”

With 1:09 remaining, the Tar Heels drove the ball 45 yards to throw a hail-Mary into the end zone, only to be intercepted by Derrek Pitts Jr. to end the game.

What a football game,” Wolfpack coach Dave Doeren said. “What a game. That’s why you play until the last second’s off the clock.”

The Wolfpack beat their biggest rival, Tar Heels, for the first time since 2018; who have been successful playing spoiler to NC State.

Wolfpack QB Leary threw for 247 yards completing 19–30 attempts and four touchdowns; giving him 35 total for the season, and surpassing Phillip Rivers’ 34 for the highest single-season mark in NC State history.

Of his 147 yards passing, Tarheel QB Sam Howell threw a touchdown; and ran for 98 yards while scoring two touchdowns from the ground.  Running back British Brooks ran for 124 yards on 15 carries.

For the Wolfpack to reach the ACC Championship game, #21 Wake Forest would have to lose at Boston College on Saturday. NC State would get the nod since they tie the best division record, while also beating Clemson head-to-head.

The Tar Heels wait in hopes of receiving an invitation to a Bowl game.