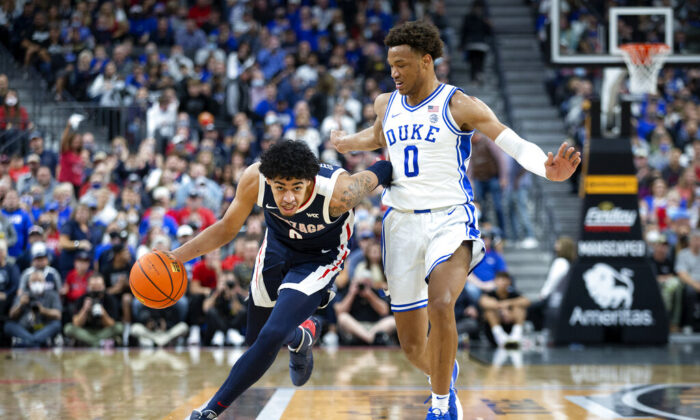 Gonzaga guard Julian Strawther (left) brings the ball up next to Duke forward Wendell Moore Jr. (0) during the first half of an NCAA college basketball game in Las Vegas, on Nov. 26, 2021. (Ellen Schmidt/AP Photo)
College Sports

An incredibly entertaining game was played between two top-five programs Friday night in Las Vegas. It resulted in fifth-ranked Duke holding off #1 ranked Gonzaga for a three-point win in front of the largest basketball crowd ever in Nevada of 20,389. The loud and excited fans seemed split equally in their support.

“It’s just a really big-time game, what a great crowd,” said Duke coach Mike Krzyzewski. “We thought it might be a showcase game and it was. But having this type of crowd was amazing. Obviously, we feel great about the win, and we think we beat an outstanding basketball team.”

Gonzaga’s passing and team-play was superb.  However, Duke used its speed and power to pressure the Bulldogs into 17 turnovers; that was ultimately the difference in the game.

Gonzaga scored the first four points of the contest before Duke took control with a 17–6 run; Duke finished the first half leading 45–42.

The second half was full of momentum shifts and lead changes before Duke took the final lead with 4:35 remaining when Wendell Moore Jr. hit two free throws to make it 75–73.

Duke had three players in double figures, and was led by freshman guard Paolo Banchero who scored 21 points on 8–17 shooting, 3–8 three-pointers, five rebounds, and two assists.

Gonzaga was led by Julian Strawther with a career-high 20 points and 10 rebounds, 8–16 from the field, and 3–7 threes.

Drew Timme scored 17 points, Chet Holmgren had 16 points and Rasir Bolton chipped in 15 for the Bulldogs.

“It felt like a Final Four-type game,” Timme said. “The atmosphere was great and it was two Goliaths going at it.”

Next up for Duke is an away game at Ohio State on Tuesday; while Gonzaga hosts Tarleton State on Monday.