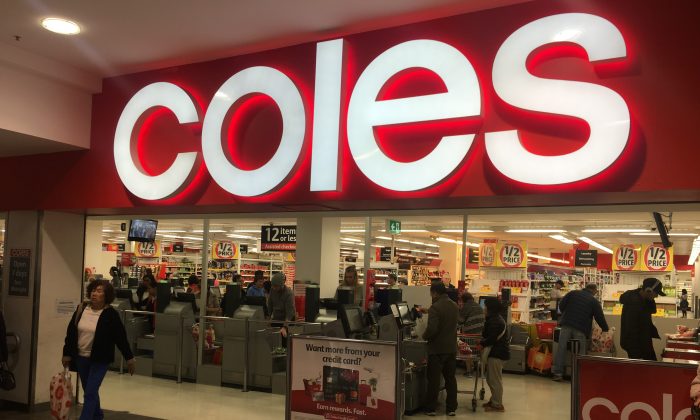 Coles supermarket has announced it would provide complimentary reusable bags to shoppers until July 8, 2018, for several states. (Janita Kan/Ntd.tv)
Australia

Coles has followed Woolworths in backtracking on their single-use plastic bag ban by temporarily giving out its 15 cents reusable bags without charge until Sunday, July 8, the supermarket announced.

In an announcement on July 5, Coles said in order to help customers transition into the routine of bringing their own bags, the supermarket will be offering shoppers complimentary bags in states where single-use plastic bags were removed for the first time.

“To help our customers during this transition period, we’re pleased to help out by offering our customers complimentary reusable plastic bags in those states where single-use plastic bags have been removed for the first time,” Coles Chief Operating Officer Greg Davis said in the statement.

“We’re really grateful for the way our customers have responded and this is a small way we can say ‘thank you’ and help them with the transition.”

As of July 1, retailers have been banned by law from providing single-use plastic bags in all states except for NSW and VIC. The Victorian government has already announced a ban that will come into effect in 2019, according to the Minister for Energy, Environment and Climate Change Lily D’Ambrosio.

“We know Victorians want to do more to reduce pollution in our environment—we’ve received an enormous amount of feedback and they’ve told us loud and clear they want us to deliver this ban.”

The announcement just comes after Coles and Woolworths faced a wave of customer backlash over the decision to charge customers for reusable plastic bags during the transition period.

In response to the growing criticism, Woolworths started handing out complimentary reusable bags on June 29 and will do so until July 8 in VIC, NSW, QLD, and WA.

According to research conducted by Queensland University of Technology’s Professor Gary Mortimer, supermarkets could potentially make $71 million by selling 15 cent reusable bags. A figure based on a six-cent profit on an estimated 1.18 billion units.

According to Coles, its reusable bag, which normally retails for 15 cents, is made from 80 percent recycled material and can be recycled by placing them in the RedCycle bins which are available at all Coles supermarkets.