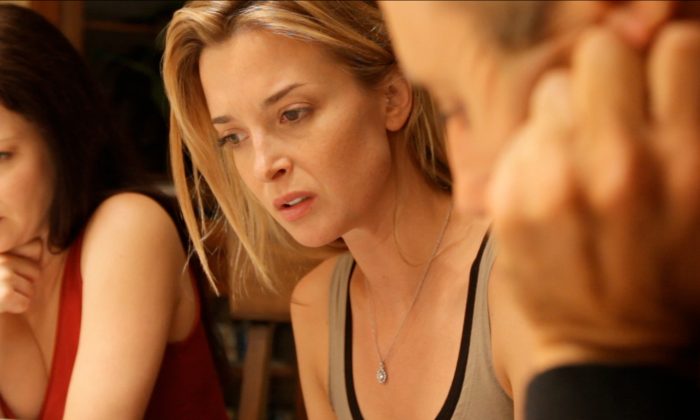 ‘Coherence’: The Quantum Night of the Comet

Suppose Schrödinger’s cat threw a dinner party. He would probably serve tuna and quantum physics. The notion of quantum superposition made famous by the hypothetical feline becomes a question of life and death for a group of hipsters when a comet crashes their soiree in James Ward Byrkit’s sci-fi mind trip, “Coherence.”

Mike and Lee are hosting some of their closest friends, as well as Amir’s annoying girlfriend, Laurie, who also happens to be Kevin’s ex, before he started seeing Em.

Although she is attractive, Em is highly insecure and nearly paralyzed with regret over her past mistakes. She is therefore less than thrilled to see Laurie, but the comet will provide some timely distractions, spontaneously cracking cell phones and knocking out the power grid.

Noticing that a nearby house still has power, Amir and Hugh (the oldest of their circle) leave to investigate but return thoroughly spooked. They also bring back a rather puzzling box. Panic and mystery ensue. However, a key clue might be found in some notes left by Hugh’s scientist brother referring to Schrödinger’s cat.

According to that classic thought experiment, given a certain set of convoluted pre-conditions, a cat placed in a box that has equal chance of being dead or alive when the container is opened, simultaneously exists in both states until an outside force interrupts, forcing the two existences to collapse into a single reality. Determining how it applies to them will be an unsettling experience.

Byrkit takes that cryptic premise and runs with it, steadily raising the stakes and cranking up the anxiety. Following Darren Paul Fisher’s “Frequencies” and Richie Mehta’s “I’ll Follow You Down,” “Coherence” heralds a mini-renaissance for concept-driven micro-budget science fiction with virtually no special effects.

Eventually, Byrkit employs a bit of sound-effects trickery, but it is far from the point of the film and spoilery to address in any meaningful way.

Considering how head-spinning Byrkit and Alex Manugian’s story gets, it is hard to imagine sending the cast out to do it cold improv style, but that is largely what they did. Mostly just armed only with their prepared situation and character notes, the ensemble somehow makes it work. Indeed, it is certainly never a problem for them to look confused or panicked, which is required throughout the final acts.

Frankly, casting Nicholas Brendon (“Buffy the Vampire Slayer”) as Mike, a washed-up former “Roswell” co-star, is so meta-inspired that “Coherence” could have coasted into conventional riff on “Night of the Comet” and still satisfied fans. In fact, Brendon loses his cool rather spectacularly as Mike.

Although she initially seems rather vanilla, Emily Baldoni’s Em deftly pulls off a critical pivot late in the game. Demonstrating consistency under difficult thespian circumstances, Hugo Armstrong anchors the film and handles the egghead material with authority as the more down-to-earth Hugh.

“Coherence” is a smart, tense genre outing that thoroughly shows up big-budget tent-poles with its superior inventiveness. Byrkit and company take a lot of risks, but they all pay off significantly. Highly recommended for fans of sci-fi and cult cinema, “Coherence” opens Friday, June 20, in New York at the Village East.