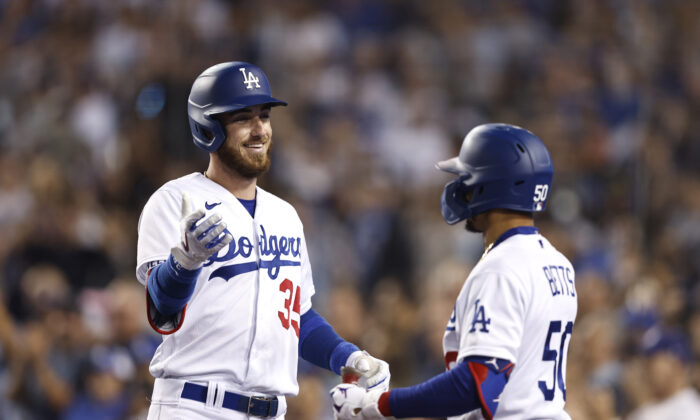 Cody Bellinger #35 of the Los Angeles Dodgers celebrates with Mookie Betts #50 after hitting a grand slam against the San Francisco Giants during the eighth inning at Dodger Stadium, in Los Angeles, on July 22, 2022. (Michael Owens/Getty Images)
Baseball

“It feels great,” said Bellinger of his seventh career grand slams. “Not gonna lie, it feels really good. It feels good to put the right swing on the ball and see the results.”

The 2019 NL MVP has since been inconsistent with struggles, hitting .208 this season and hadn’t hit a homer since July 1, in 15 games and 56 plate appearances.

“I’ve been seeing the ball well and staying within the zone and getting pitches to hit and just not doing what I want with them,” Bellinger said. “But, you know, that’s part of the game. So focusing on staying through the baseball and getting my ‘A’ swing locked on those pitches.”

Mookie Betts and Freddie Freeman both had two hits for the Dodgers. Betts had a three-run homer in the eighth inning of the previous game giving the Dodgers a 9–6 win.

Betts began the first with a single to center, while Will Smith and Max Muncy walked to load the bases with two outs. Gavin Lux then was walked by Logan Webb (9–3, 2.77 ERA) to score Betts for an early 1–0 lead.

The Giants would tie in the fourth after Evan Longoria and Thairo Estrada each hit singles ending up on the corners of the bases following a throwing error by third baseman Muncy. Longoria then scored off of Yermin Mercedes’ single to right field.

Dodgers Freeman led off the eighth with a single to center field, then advanced to second on a wild pitch, and eventually made it to third, following a fielding error off of  Giants first baseman LaMonte Wade Jr. on Muncy’s ground ball with one out.

After Gavin Lux struck out, the bases were loaded resulting from Jake Lamb being hit by a pitch, setting up Bellinger’s 12th homer of the season for the 5–1 win.

Bellinger was 0-for-3 on the night and had a count of 0-and-two when Sam Long’s sixth pitch, a hanging curve ball, was sent 383 feet into the right field corner.