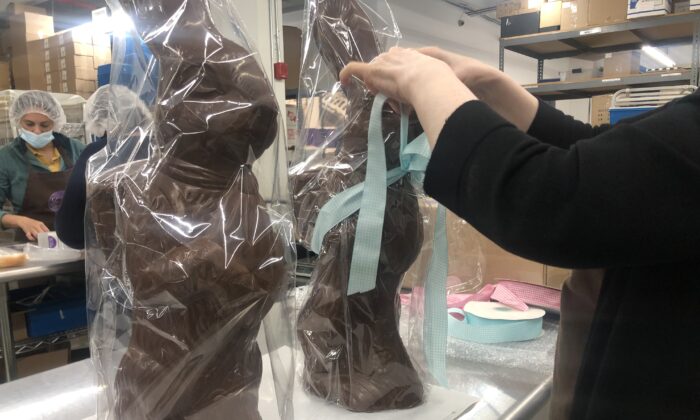 Chocolate Easter Bunny at the Li-Lac Chocolate Factory in Brooklyn, NY. (Photo by The Epoch Times)
Businesses in COVID-19

Li-Lac Chocolates, New York City’s oldest surviving high-end boutique chocolatier, discussed the impact of the pandemic and recent supply chain snarls on business in an interview with The Epoch Times, as millions of Americans get ready to buy candy for their families this Easter.

Christopher Taylor, CFO of Li-Lac Chocolates, said that his company managed to pull through the pandemic in time for the profitable 2022 Easter season. He warned, however, that the recent global cocoa bean shortage poses a threat to prices, availability, and profitability.

Li-Lac Chocolate, founded in 1923, was purchased by Taylor and his two partners in ​2011. Taylor said that their business model is “traditional chocolate based on consistent formulation, and that for 99 years the flavor has never changed.”

The company happens to maintain the largest collection of chocolate molds in the United States with over 1,000 molds. They make chocolates in classic NYC shapes, such as checkered cabs, famous skyscrapers like the Empire State Building, and landmarks including the Statue of Liberty. They even do custom molds for particular clients and corporations.

He said that quality chocolates have a trade-off between freshness and shelf life and that Li-Lac formulates its products for freshness.

The proportion of cocoa butter in the mix (with cacao powder) is key to making good chocolate, he explained. Cocoa butter is a very expensive ingredient, which is why mass-made chocolates don’t use much of it, but it is key to exquisite flavor.

However, worsening supply shortages and delays since the first quarter of 2021 have had an effect on production.

Li-Lac, like many companies, was forced to adjust its business model to survive the pandemic and lockdowns with a successful shift from a focus on its retail business to online orders. Tourism business in Li-Lac’s five Manhattan stores is down significantly, they are relying mostly on local customers for now. Gift orders increased significantly last year, as more people had stimulus cash to spend.

Despite Li-Lac surviving the pandemic, the supply chain crisis is hitting the supply of key ingredients needed to make its high-end chocolate. Taylor explained that near-term customers could potentially see sticker shock when shopping, and in the case of some products, like the cult classic 3-foot-tall Easter Bunny, will find that they’re simply unavailable.

The majority of the world’s cocoa bean supply is located in plantations in West African countries like the Ivory Coast. The suppliers are dealing with delays in shipping due to post-pandemic disruptions.

“Just as we thought we were through with the pandemic, we got hit by the supply shortage crisis,” said Taylor. He said that they were stressed with “the big chocolate shortage,” and that the company at times “had to scramble to secure the raw ingredients.”

He said that the staff was always making sure that the right amount of beans was in stock. He said they were very fortunate by making a timely contract for an order of 100,000 pounds of beans in 2020 when prices were cheaper. Li-Lac had always purchased under contract, until this became impossible last year.

“Usually, we sign contracts to purchase 100,000 pounds of raw chocolate,” noted Taylor, “but right now we’re purchasing day-to-day. At times over the past year, we’ve been down to just a few days of supplies,” he said.

Taylor observed that some of the smaller chocolatiers who normally ordered 10,000 pounds of beans at a time could be hurting.

“Consistency, I mean, that’s—that’s our pride,” said Taylor. “It’s that we’ve been consistent for 99 years, we’ve never really changed our formulation or recipes, and then all of a sudden, in the last year, with these shortages, we haven’t been making our 99.5 percent quality consistency targets, maybe it’s down to 98 percent.”

“It’s embarrassing because we pride ourselves on our consistency. We’ve done our best to maintain consistent formulation but prioritize quality. Most customers can’t tell the difference, but at times our consistency has suffered.”

Anwar Khoder, Li-Lac’s master chocolatier, and the longest serving employee at the company at almost 40 years, believes that the quality of the chocolate remains unchanged since the shortage developed, but said there have been some formulation adjustments, which mildly impacted the consistency of the flavor.

The Supply Chain and Shipping Crisis

Li-Lac’s internet manager, Karine Khoder, said that although Easter is one of its important sales seasons, Christmas is the company’s peak season. The company focus is primarily on gifting, rather than snacking. She said that shipping reliability has declined somewhat (in terms of number of days), but it is still well over 90 percent.

“Before the pandemic, we were 99 percent certain that a box to Chicago would arrive in 2 days, but now it’s more like 95 percent,” said Khoder.

In the short-term, the company will survive intact because they were lucky to secure their supplies, but in the longer term, it’ll be a problem if the global commodities crisis worsens.

Jeremy Merrit, the purchasing manager, is increasingly concerned about the reliability of delivery of supplies, as many vendors and suppliers have their own issues. “An order that used to get done in 20 minutes now takes over an hour. We’re dealing with a lot of new people and many are still working from home, which definitely impacts reliability and efficiency,” he said.

According to Merrit, the supply chain issue has become a logistical nightmare. “Everything has become more complicated and time consuming,” he said.

So far Li-Lac has avoided major price increases, but certain products, especially those that are packaging intensive, have taken a hit.

“At least one almost once a day, I get an email from a vendor saying that they will raise their prices at least 6 percent or 12 percent due to excuses like labor costs, minimum wage increases, various reasons,” said Merrit.

Merrit said that 80 percent of Li-Lac’s packaging materials are mainly made in China due to costs. Package supplies, plastic ribbons, custom gift boxes, gift bags, and baskets are made in that country. Supply orders cannot be guaranteed to be on time due to supply issues with Chinese suppliers after the recent pandemic lockdowns in China’s major port cities.

“It was a huge eye-opener for us to realize how reliant we had become on China,” he said. “Reversing this is definitely a priority.”

Taylor is confident that Li-Lac Chocolates will continue to survive the current situation, because of its strong, loyal customer base and its world-famous quality product. The company’s market reputation as an old established firm will likely see it well off in the near future.