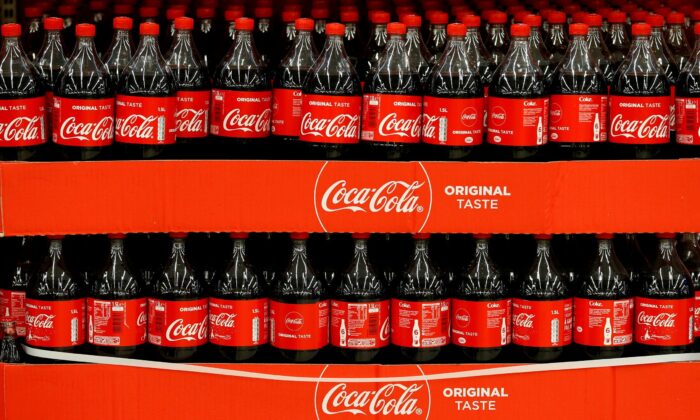 Bottles of Coca-Cola are seen at a Carrefour Hypermarket store in Montreuil, near Paris, France, on Feb. 5, 2018. (Regis Duvignau/Reuters)
Companies

Coca-Cola Turns to Refillable Glass Bottles in Fight Against Inflation

Coca-Cola Co warned on Monday consumer demand could slow as rampant inflation shows no sign of cooling and said it was focusing on more affordable and refillable glass bottles in markets facing the biggest pinch from price increases.

Demand for sodas and other packaged foods has so far held strong despite price increases that resulted from higher costs for everything from aluminum cans to sugar, labor, and transportation.

“I do not expect (price) elasticities to be inelastic going forward. I expect elasticity to increase at some point in the future. Will that be next quarter? Or will that be next year? I can’t give you the answer to that,” Quincey said on call with analysts.

Procter & Gamble earlier this month said it expected demand for its U.S. feminine, home, and oral care products to soften as summer price increases feed through to shop shelves.

To prepare for the expected drop in consumer purchasing power, Coca-Cola said it was expanding the distribution of cheaper returnable or refillable glass bottles in emerging markets in Latin America and Africa.

It is also experimenting with returnable bottles in the Southwest United States.

Coke’s net revenue rose 16 percent to $10.5 billion in the first quarter and its shares were up 1.6 percent in morning trading.

The company said suspension of its operations in Russia would impact its annual profit by 4 cents per share and annual net revenue by about 1 percent to 2 percent.

It reported a first-quarter profit of 64 cents per share, beating estimates of 58 cents, according to Refinitiv data.