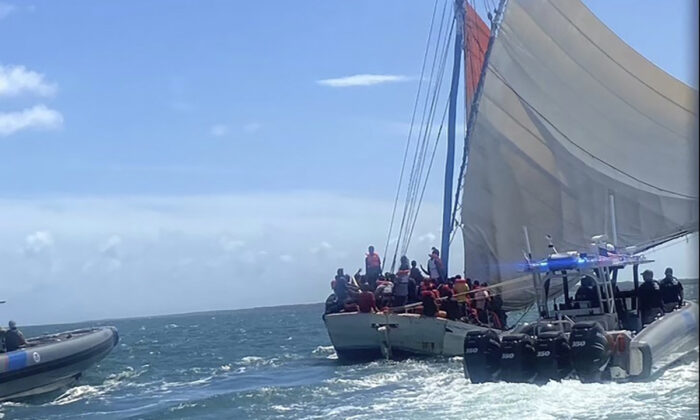 Rescue crews safely transfer people from a grounded vessel believed to be carrying migrants, to U.S. Coast Guard ships, off the coast of Key Largo, Fla., near the gated community of Ocean Reef, on Aug. 6, 2022. (Courtesy of U.S. Coast Guard via AP)
Florida

KEY WEST, Fla.—Two people died and five were missing after a boat believed to be carrying migrants attempting to enter the United States illegally capsized off the coast of the Florida Keys, the Coast Guard said.

Eight people were rescued, the Coast Guard said in a news release Friday. The agency described the boat as a “rustic vessel” that was making an illegal voyage with 15 migrant passengers. It was not immediately clear where the migrants were originally from.

Reports of the capsized vessel about 14 miles south of Sugarloaf Key reached the Coast Guard around 10 a.m. Friday. One person was rescued from the water by the Royal Caribbean cruise ship Mariner of the Seas, the Coast Guard said.

“Our search continues for others that may have survived this tragic incident,” said Rear Adm. Brendan McPherson, commander of the Seventh Coast Guard District. “This situation highlights the risks these migrants face as they attempt to enter the United States illegally by sea.”

Meanwhile, the Coast Guard responded to a grounded sailing vessel that was believed to be carrying more than 100 migrants Saturday afternoon.

The boat was spotted off the coast of Key Largo, near the gated community of Ocean Reef, officials said.

Rescue crews transferred the people from the grounded vessel to Coast Guard ships, officials said. Some entered the water without life jackets and needed to be rescued, the Coast Guard said.

Photos taken from a WPLG-TV helicopter showed dozens of people sitting on the grass, having been given blankets and towels.

Officials did not immediately release details about where the people were from or specify how many were on board.