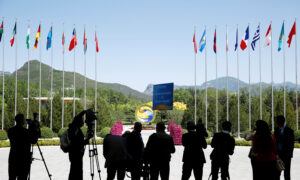 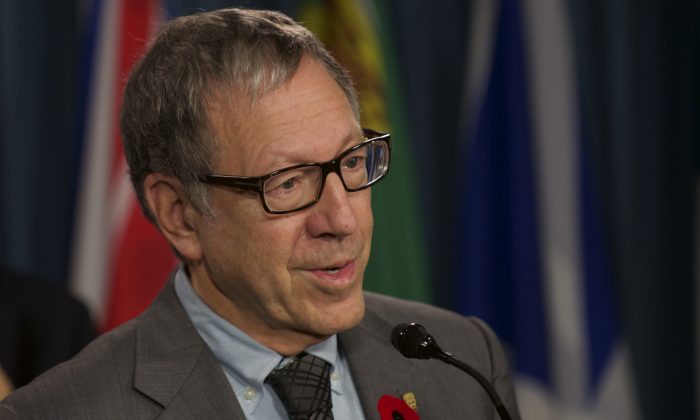 Irwin Cotler, former minister of justice and former attorney general of Canada, speaks during a press conference on Parliament Hill in a file photo. Cotler has authored a new report for a coalition of independent international legal experts exploring ways to increase protection for journalists. (Matthew Little/The Epoch Times)
Canada

An alliance of international legal experts is calling for the protection of journalists at risk by the creation of a global charter of rights and strengthened consular support, in response to challenges faced by journalists in an increasingly dangerous world.

Authored by Irwin Cotler, former justice minister of Canada and an international human rights lawyer, the report was released by the High Level Panel of Legal Experts on Media Freedom during a panel discussion at the Global Conference on Media Freedom held online on Nov. 16.

“This report sought to recommend a series of measures, domestically and internationally, that will add content and clarity, justice, and accountability to the current discretionary and sometimes arbitrary paradigm of consular support and convert it into one of legal obligations of the states and the rights of detained journalists,” Cotler said at the conference.

“States can protect the international free press and fundamental rights of journalists reporting abroad, particularly when they are working in countries fraught increasingly with danger,” said Cotler, currently chair of the Raoul Wallenberg Centre for Human Rights in Montreal.

Cotler said the conference was taking place at a time when the world is grappling not only with the COVID-19 pandemic but also “a political pandemic, characterized by a resurgent global authoritarianism, the back-sliding of democracy, and global assaults on media freedom, where journalists are increasingly under threat.”

The High Level Panel of Legal Experts on Media Freedom was convened at the request of the British and Canadian governments and consists of leading lawyers from around the world.

Amal Clooney, the deputy chair of the panel, said Cotler’s report proposes a new “charter of rights” for detained journalists and a new code of conduct for governments. These would be overseen by an international commissioner who would monitor governments’ compliance.

“A new security law in Hong Kong has led dozens of arrests and chilled the press,” Clooney said at the conference.

“In the COVID era, the threat to journalists have only increased, when new draconian laws have been increased. In China, individuals tried to report the early spread of the virus were persecuted for spreading false rumours and disturb public order.”

The report, titled “A Pressing Concern: Protecting and Promoting Press Freedom by Strengthening Consular Support to Journalists at Risk,” draws upon five decades of Cotler’s involvement as legal counsel for political prisoners, such as those with Canadian ties who continue to languish in Chinese jails, including democracy movement leader Wang Binzhang, Uighur activist Huseyin Celil, and Falun Gong practitioner Sun Qian.

“I encountered up close the importance, indeed the imperativeness, of consular assistance and protection, which is crucial not only for the detained journalist but is a linchpin for media freedom,” Cotler said when releasing the report.

Prime Minister Justin Trudeau, who also spoke at the conference, drew attention to the plight of journalists in Hong Kong and Belarus.

“It is never acceptable for a journalist to be attacked for doing their job,” he said.

Michelle Bachelet, the U.N. High Commissioner for Human Rights, talked about the issue of media censorship.

“Governments should not privatize censorship and hand over to the companies the responsibility to decide what is lawful and what is not lawful,” she said. “That is a judicial function, not a function of executives and certainly not a function of the corporations.”

The conference was co-hosted by Canada and the Republic of Botswana and featured speakers a broad group of experts, including high-level government officials, journalists, media organizations, international organizations, and civil society representatives.