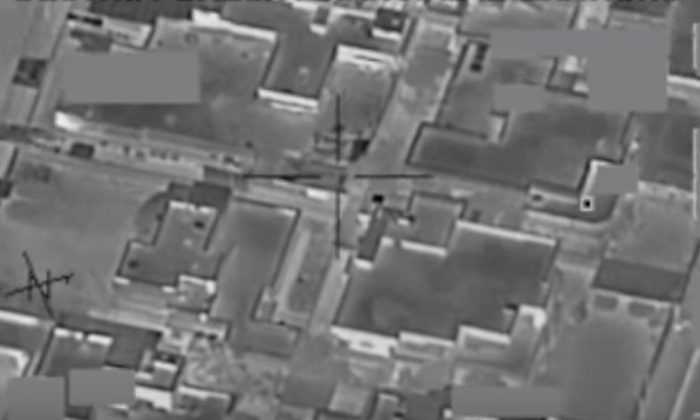 An aerial video has captured a U.S.-led coalition airstrike on an ISIS cash distribution center that took place on Monday, Jan. 11.

The airstrike targeted an ISIS center near Mosul, Iraq, and can be seen in footage released by the U.S. Department of Defense and uploaded to YouTube. In the video, literal clouds of money can be seen flying through the air after bombs hit the facility.

“It was a good strike. And we estimate that it served to deprive ISIL of millions of dollars,” Gen. Lloyd Austin, who is in charge of the U.S. Central Command, told CNN.

“And combined with all of the other strikes that we’ve done on ISIL’s gas and oil production and distribution capabilities and strikes against his economic infrastructure and the various sources of revenue, you can bet that [it] is feeling the strain on his checkbook,” he continued.

First on CNN: The Pentagon releases a video of the U.S. bombing “millions” in #ISIS cash https://t.co/wRbFqMQTSm https://t.co/OygVkQbaUW

U.S. officials estimate that millions of dollars were destroyed by two 2,000-pound bombs used in the strike.

“[ISIS] needs those funds to pay their fighters, to recruit new fighters and to conduct their various maligned activities,” Austin said.

The U.S. Treasury Department has described the ISIS terrorist group as “probably the best-funded terrorist organization we have confronted,” saying the group profits from black-market oil revenue and taxation of territories it has seized, as well as extortion and kidnapping ransoms.