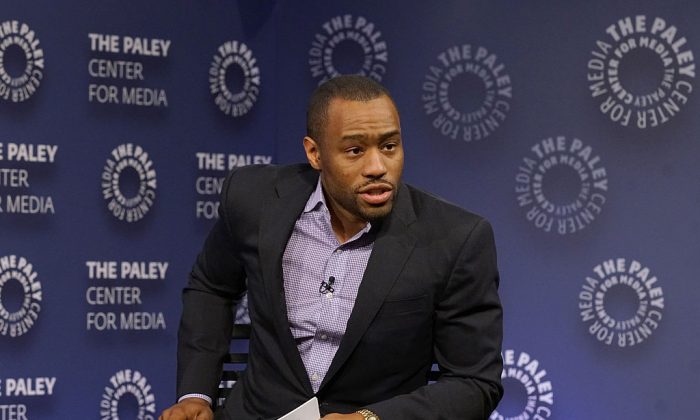 Moderator Marc Lamont Hill attends BET Presents 'An Evening With 'The Quad'' At The Paley Center in New York City on Dec. 7, 2016. (Bennett Raglin/Getty Images for BET Networks)
US News

A CNN analyst and college professor faced fierce backlash for appearing to call for Israel’s destruction during a speech at the United Nations on Nov. 27.

Marc Lamont Hill, who frequently appears on the left-leaning cable news channel and is also a professor at Temple University, called for a “free Palestine from the river to the sea” during the speech.

Similar phrases have been uttered by the leadership of Hamas, a terrorist group that controls the Gaza Strip and says it wants to destroy Israel.

Hill also endorsed the Boycott, Divestment, and Sanctions movement that is widely perceived to be anti-semitic by many Jews.

Among the critics of Hill’s speech was Sharon Nazarian, senior vice president for international affairs for the ANti-Defamation League, a Jewish NGO.

“Those calling for ‘from the river to the sea’ are calling for an end to the State of Israel,” Nazarian said in an email to the Jewish Journal.

“It is a shame that once again, this annual event at the United Nations does not promote constructive pathways to ‘Palestinian solidarity’ and a future of peace, but instead divisive and destructive action against Israel.”

And here it is, Marc Lamont Hill calling for a "free Palestine from the river to the sea" (video via @bennyavni) pic.twitter.com/E7ugrByKyf

Seth Mandel, a Jewish op-ed writer for the New York Post, said that Hill’s comments were “an explicit call for Jewish genocide.”

“I’ve never been naive about anti-Semitism in America, but honestly never thought I’d see a mainstream CNN guy and professor, on camera, shout ‘free Palestine from the river to the sea’ at the UN, to thunderous applause, and see a collective shrug from even non-socialist liberals,” he added on Twitter.

Lamont Hill is described by CNN as “one of the leading intellectual voices in the country.”

CNN has not issued a statement on the speech as of yet.

Rising antisemitism has led to an increase in hate crimes against Jews, according to an FBI report.

Hate crimes against Jews rose by 37 percent in 2017 and the increase left anti-Semitic attacks as 58 percent of all religion-based hate crimes last year, even though Jews are only about 2 percent of America’s population.

Lamont Hill has received criticism for his radical views in the past, such as praising Christopher Dorner, a former LAPD officer who killed four people and wounded three others in 2013 during a shooting spree that he claimed to undertake to clear his name.

“He’s been like a real-life superhero to many people,” Lamont Hill said. “When you read his manifesto, when you read the message that he left, he wasn’t entirely crazy. He had a plan and a mission here.”

Lamont Hill also faced backlash for appearing with the openly anti-semitic Nation of Islam leader Louis Farrakhan. In a picture the professor posted on Facebook in 2015, he said he had “a short but beautiful conversation” with Farrakhan, who has called Jews “termites” and praised German leader Adolf Hitler, who led the Holocaust against Jews across Europe.

“The Jews don’t like Farrakhan, so they call me Hitler. Well, that’s a good name. Hitler was a very great man,” Farrakhan said in a speech in 1984.

A photo of Lamont Hill and Farrakhan taken in 2016 was used by Farrakhan to promote a music collection this year, reported The Wrap. Hill condemned Farrakhan’s comments against Jews but said he didn’t regret meeting with Farrakhan in 2015 and 2016.