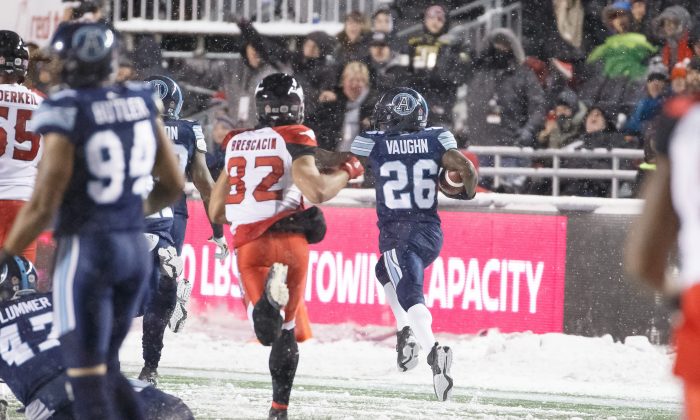 OTTAWA—The Toronto Argonauts know how to win Grey Cups, and for all the greatness the Calgary Stampeders have shown during the regular season, the “choker” tag in Grey Cups is proving hard to shed.

The 105th Grey Cup in the nation’s capital on Nov. 26 cemented that narrative as the Argos came back from an eight-point deficit late in the fourth quarter to win 27–24.

It’s borderline inconceivable how the Stamps blew their opportunity and one has to wonder how such sorcery could unfold again. Last year, after a 15–2–1 regular season, they lost the Grey Cup in overtime to the Ottawa Redblacks, who had a losing regular-season record.

The Argos have now won 17 Grey Cups—more than any other franchise—including in each of their last six appearances. For the Stamps, it’s the second-straight heartbreaking Grey Cup they’ve lost when being heavily favoured. They are now 7–9 in the big game.

Argos quarterback Ricky Ray had a hard time articulating just how his team won. But the sense was that no matter what was happening on the field, there could only be one outcome.

“They’ve been great for a while now. It’s just our night tonight,” he said.

“Felt like we had something going that just deserved to win the Grey Cup this year,” he said. “And it happened. It’s hard to explain why it did, but we just found a way to do it.”

After seeing what happened, how could one think Calgary isn’t cursed? Leading 24–16, the Stamps were going to make it a two-score game and essentially wrap up the Grey Cup.

But then came the play—a practically unimaginable occurrence. Calgary quarterback Bo Levi Mitchell found his favourite target Kamar Jorden. But in fighting for a bigger gain, Jorden fumbled the ball and Toronto’s Cassius Vaughn returned it 109 yards for a touchdown.

In a highly unusual game in the snow, the Argos recorded the longest passing touchdown and fumble return TD in Grey Cup history in the same game. Ray connected with DeVier Posey in the first half for a 100-yard catch-and-run TD. Aside from that play, the Argos had just 35 yards of offense in the first half.

For long stretches, Calgary was the better team. Mitchell was moving the ball more effectively than Ray and Jerome Messam was averaging over five yards a carry. The Argos finished with just 16 yards rushing. Statistically, they literally had no business winning this Grey Cup.

“They set the standard for the league,” Posey said about the Stamps. “They’re a great organization. I was nervous on the field in the end when Jorden made that catch.”

Posey was referring to the catch that put Calgary in position to at least kick a field goal and potentially send the Grey Cup into overtime for a second straight year. Instead, Calgary went for the win and Mitchell’s pass into the endzone was picked off.

But how great are the Stamps—especially in the regular season? Those aren’t empty words from Ray and Posey. The 105th Grey Cup was their fourth appearance in the big game in six years. Calgary finished first or second in the regular season standings in each of the last 10 seasons, and reached six consecutive West Division finals. To say the Stamps have been the regular-season class of the CFL would be a massive understatement.

Adding to the oddness of the Argos triumph, Grey Cup 105 was the first in eight years in which the winning team had fewer rushing yards; however, the Argos did win the all-important turnover battle 2–0.

It started snowing heavily about two hours prior to the game, making it feel like a truly festive Canadian event. However, weather can be a big equalizer and Calgary could not have been happy about it.

Nevertheless, the Stamps put themselves in a position to win the game. But sometimes football in the snow leads to the unexpected and a sellout crowd of 36,154 at TD Place certainly got it.